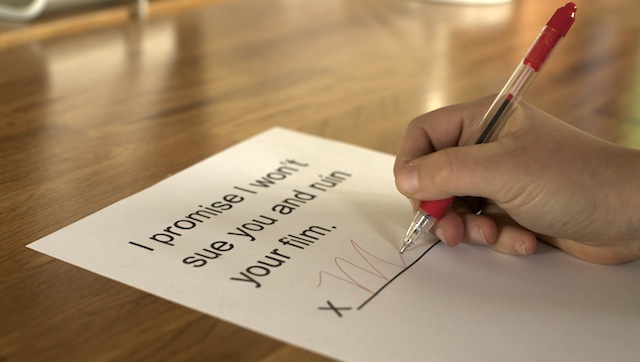 But we’re willing to take that risk.

Why? Because they matter!

If you’re not having people sign release forms, it’s only a matter of time before you’re removing your favorite shot from the film because an angry parent doesn’t want their child’s face floating around on Vimeo.

And rightfully so — would YOU want footage of yourself being used without first getting the opportunity to officially say “yes, I’m cool with it.”

Angry parents are just one of a whole number of messy scenarios that could come your way if you don’t have everyone in your films signing the appropriate release form….

So what can you do to prevent any of these frightening potential circumstances?

Get them to sign a release form. Every time.

So what does this require from you, exactly?

Once you get that down… it’ll be like old hat, and getting all your releases in order won’t even be much of a thought!

So let’s get into the details…

What are release forms?

As the photo at the top of this post so snarkily illustrates, release forms are essentially pieces of paper that serve to legally cover your butt.

By signing a general talent release form, the signer:

You’ll want a regular adult talent/model release form to start with, but there are a few other kinds you’ll also want to have on hand at all times:

A minor release form (parents will sign for their kids).

And a location release form (for any establishment you’re shooting in).

Each of these involves a similar kind of legal-y jargon that essentially waives their right to object to being in your film after you’ve finished producing it.

If you don’t have them sign a release, you have no right to use the footage should they want to have it removed for whatever reason.

But wait… isn’t that what a filming notice is for?

What a filming notice does is allow you to skip all the paperwork when you’re in a super public place (shooting in a store or at a coffee shop, for example) by simply putting up one sign that says, essentially: “We’re filming here, and if you walk into the frame you’re agreeing to be in our film!”

You can put it up just about anywhere… 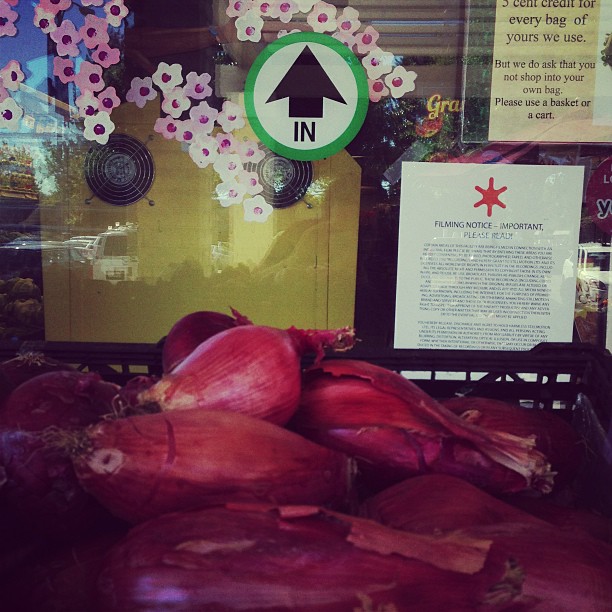 So, if we’re talking about just random passersby that come into your frame — all you need to do is put up your filming notice.

But anyone who is intentionally featured as a part of the scene you’re filming, you’ll need to be handing them a real talent release form.

When do I need to bring release forms?

Pretty much all the time!

Release forms are a necessary part of every shoot, even if you know the talent SUPER WELL, because you just never know.

We always try to get the necessary release forms squared away before a shoot even begins, because if we find out that someone DOESN’T want to sign AFTER we’ve already shot everything, we’re going to have to remove any shot with that person in it!

And it’s just more of a headache to go home after your shoot and start sending out emails to everyone in your film, trying to collect releases after all has already been done.

In summary: not only do you need to bring the necessary release forms, you also need to get them signed before hand.

How do I talk to people about signing this?

The good news is that almost everyone does.

Here’s the breakdown of how it usually goes:

To (almost) guarantee that the people participating in the film will happily sign the form, we recommend these 5 tips:

Why are you doing this project/film? Why does it matter? And why you need a release? These are the things you need to answer for

2. Be passionate and excited.

Not only are you passionate about what you’re doing, you’re excited that they’re helping you! Without your talent, you’d have nothing — let them know how happy you are that they’re participating.

This is just something you should always be aiming for with any shoot, but when it comes to getting people to sign a piece of paper that waives some of their rights… they’re going to be much more trusting of you if you aren’t taking up a bunch of their time and messing with their schedule!

Tell them things like how long the shoot will take, when the edit will be done, and let them know that there’s a chance they might not end up in the final piece.

Instead of just handing it to them and saying “Hey, sign this would ya?” be sure to explain it to them. Once again, they’re going to be more trusting of you if you take the time to show that you care about their concerns.

Ok so… how do I get these forms?

Alright, so the smartest way for you to go about this is to find a reasonably priced (or free) template online — there are hundreds — AND (here’s the important part) schedule an appointment to have a lawyer look it over.

Because laws vary from state to state, and no matter what you get off of the internet it may need adjusting depending on where you live. The same is true for drafting up a filming notice.

As we previously linked to above in this post, American Society of Media Photographers has a ton of resource for all the legal releases/contracts you need as a filmmaker. Here you’ll find a lot more information on this topic, and draft up any releases you don’t already have. Once you’ve got a draft you can have a lawyer look over it and make sure you’re good to go.

So… if you don’t have the necessary release forms already, here’s your next course of action:

1. Get a talent release form, a minor release form, and a location release form.
2. Have a lawyer look them over and make sure everything’s copacetic.
3. Print out a bunch of copies!
4. Practice your approach to asking people how to sign.

And there you go — not only are you doing great work… you’re legal!

What’s your experience been with release forms?

Any good (or bad) stories in this arena? Tell us about it!