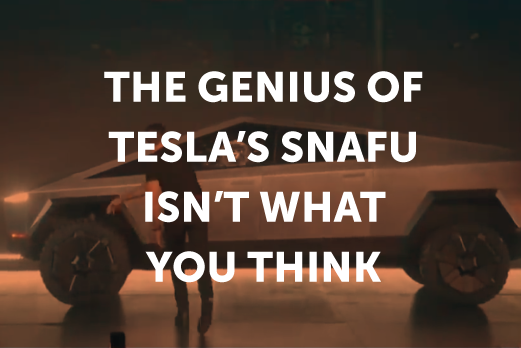 The Genius of Tesla’s Snafu Isn’t What You Think

By Amina MoreauJanuary 27, 2020Storytelling
No Comments

There’s a lot of buzz out there about whether or not the glass demo mishap was choreographed or not. Either way, Elon Musk was certainly rewarded with a great deal of media attention.

But for some reason, nobody seems to be talking about the deeper wisdom behind the moment.

Tesla’s failure was a triumph in storytelling. And not just because it got everyone talking.
People who, for better or for worse, are Musk fans, generally believe in a few things…

They value the idea of challenging the status quo;

They embrace that entrepreneurship inevitably involves some failure and iteration;

Understanding this, Musk doesn’t just sell cars. He sells a vision of our future—one that his followers believe in too.

In the span of a 40-second demo, he implicitly expresses the three core values above, which he and his fanbase share.

When the first window broke, Musk immediately cussed. It’s bleeped out in the embedded video, since the event was broadcast by more traditional outlets to millions of viewers. But being center stage didn’t stop Musk (and rarely does) from doing something that may rub some people the wrong way. It’s just another gesture symbolizing his belief in doing things differently.

But the most brilliant part of this incident happens after the second window smash. Musk turns around, takes a step, and concludes that there’s “room for improvement.” This statement, so casually declared, speaks volumes about how he thinks about innovation, business, and the bigger picture. Failure is an inevitable part of the pursuit of ambitious goals, and if you don’t agree, he doesn’t need you. You represent the status quo.

These three words, “room for improvement,” essentially define Elon Musk as a brand, in everything he does and owns.
This makes the window snafu a perfect opportunity to grow trust and foster loyalty with his audience. He never stood up there and said, “I believe in challenging the status quo and that innovation requires failure and iteration.” Instead, he let his actions show it. And as the old saying goes, actions speak louder than words. (Read more about the power of showing instead of telling here.)

This sentiment is also amplified by the fact that his underbelly was exposed. He’d just failed—publicly. When we’re vulnerable, when we let people see our weaknesses and trust them to be understanding, that sense of faith is reciprocated.

Combining this kind of implicit messaging with the extended media reach the event got (largely due to the gaffe), Musk has only strengthened his relationship with his audience.

So whether the demo failure was engineered or not, Musk’s response to it was played wisely.

Of course, making shatterproof glass isn’t exactly rocket science… and Elon Musk is a rocket scientist, so who really believes this wasn’t planned?

PS: I hear your counter argument: yes, the Tesla stock dipped the next day. But…

Instead of spending his own marketing dollars to get his message out, he spent your dollars (if you own Tesla stock, that is).

PPS: The fact that nobody I’ve encountered is talking about this aspect of the event is a testament to its brilliance. It was done so implicitly, so subtly, that it only entered the subconscious… which is an extremely effective way of using story to shape beliefs in others.