and that was how stuart appleby introduced himself to us. with his down to earth personality and witty humor, it was easy to forget that appleby was the winner of 9 PGA tours and a host of other tournaments. we never really know what to expect when meeting these golfers for the first time but our approach is always the same — try to learn as much as we can about them so we can tell their story. for appleby his upbeat personality and his love for the game, rather than the game itself, was his story. in-between setups, appleby would come up to us and joke around, chat about dslr cameras, broadband technology, and how freezing cold it is in canada. i made sure to let him know that part of our team was actually from california.

because of the small footprint and efficiency of our team, professional sports athletes like appleby are quite comfortable around us. at one point he forgot that we were shooting a commercial and wandered off to chat with another fellow golfer. we were more like just a group of onlookers rather than a full commercial film crew on set. he often forgot that we were filming behind him and took a couple swings that came ridiculously close to hitting my camera.

for this series of spots our game plan for pre-production went something like this. we walk the course with tatjana (art director) a day before each shoot and come up with a pile of notes for shots, interview locations, and time-specific events based on the talent’s schedule, light and general logistics. later that day we then transcribe all of the notes into a cohesive game plan that puts everybody in motion and makes the most of the timing, the crew, and the light – all while trying to maximize the things that really let us get at the core of this particular story. 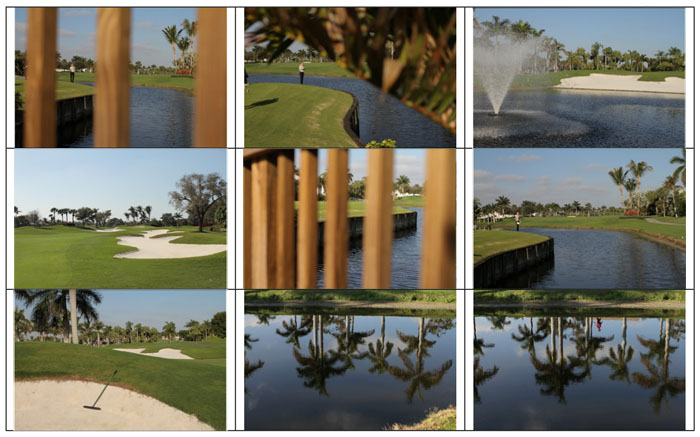 part of a scouting shot list; paying attention to light, logistics, relevance to story, and all the elements that define a specific hole.

whether it be callaway golf commercials, ‘the season’ tv series, or the superbowl, lensprotogo has played a huge role in providing us incredible service and support during many shoots. although we each have our own camera kit, some shoots call for a specific set of gear.

on these callaway shoots, we knew that moving fast was crucial. on one specific shoot, we had lined up half a dozen golfers with 4 teams rotating between shooting, scouting, setting up, and lighting. we knew the monopods, sliders, steadicam, and crane had to be ready to go at all times, so having to share cameras among the tools didn’t make sense. lensprotogo was able to ship us enough gear so each tool had its own camera and lens set.

for the superbowl, which we shot mostly with tilt-shift lenses, each person of the team had a 17/24/45/90 tilt-shift as well as a 1.4 and 2.0 tele-converter for even more reach. to get three of each in a matter of days after making a call was just astounding and really allowed that piece to happen.

in the course of traveling weeks at a time, unplanned situations such as lost or broken gear and rescheduling of shoots are bound to happen. lptg has provided us a reliable and dependable solution to these last minute emergency circumstances. sometime we’re only able to give them 1 to 2 days notice and they’ve pulled through every time in getting our team outfitted with proper gear and backup equipment. at times they have shipped gear cross-country faster than we are able to get there ourselves.

whether your looking to try out lenses before you buy, you run into a emergency situation, or you have a shoot that requires something a little different, definitely check them out. the team at lptg has saved more than a handful of shoots for us and for that we will continually spread the word.