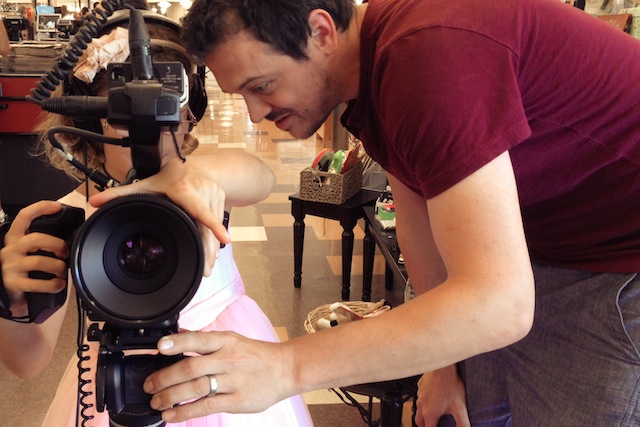 “We just made our first movie…”

To be honest, we still feel like we don’t know what we’re doing half the time… but somehow it’s all managed to come together. And after a very long night of last-minute tweaks, we’re ready to show our trailer to the world.

This project has massively changed our lives as both filmmakers and everyday people. While we do feel excited, proud, and exhausted after finishing this film… we know that this is just the beginning of another journey. Making a film is one thing, but getting it out there and showing it to the world is another.

We’re scared, to say the least. But stepping outside of the ol’ comfort zone is pretty much a job requirement so… here we go.

We now present to you, our friends and fellow filmmakers, the official trailer for #standwithme — a stand against one of the world’s darkest evils.

Our hope with this trailer is not that you’ll come out to see this film because it looks like a good movie. Our hope is that 30 million human beings is something you can’t turn away from, and that this trailer will leave you wanting to know more about the issue and how we can all do our part to truly put an end to this suffering.

This has been a huge undertaking for a small production studio like ours — from funding this project almost entirely by ourselves, to putting in long hours and sacrificing much of our personal lives — it hasn’t been easy.

What made us want to do this?

Well, in the beginning we didn’t even know what we were getting into. We heard a story about a 9-year-old girl named Vivienne Harr in California, who set up her lemonade stand with the goal of raising $100,000 and freeing 500 children. She asked customers to “pay whats in their heart,” and after 173 days straight of selling lemonade she met her goal, but decided to keep going. The spark that lit Vivienne’s fire was a gorgeous photo by Lisa Kristine, who takes a stand herself by traveling around the world photographing modern day slaves. 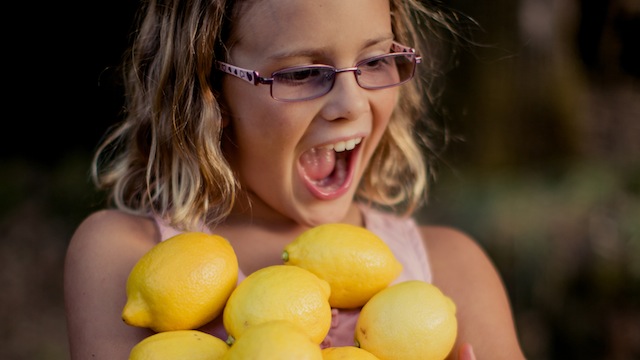 Just a little over a year ago, Vivienne didn’t even know that slavery still exists. Now she’s raised hundreds of thousands of dollars in the name of freeing these children, and her lemonade stand has become a Social Purpose Company (SPC) called Make-A-Stand Lemonade, a new kind of corporation designed to maximize good.

There was a time when Lisa Kristine also didn’t know that slavery still exists. When she found out, she took a stand by going into the mines and farms where slavery is happening and capturing moments throughout the daily life of a slave. Vivienne saw one of those photos, and look how far her mission has come since then. View Lisa’s work. 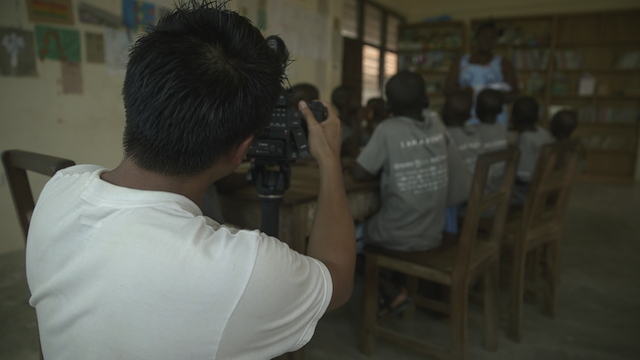 We also didn’t know. We were just looking for a great story to share as a 3 minute piece, for our annual non-profit filmmaking project. We thought Vivienne’s story sounded great, but we first had to investigate. After one conversation with her father, we knew we had to find out more about Vivienne and more about the issue she’s fighting. As we dug deeper, we found ourselves in long conversations about the horrors of slavery today, how many voices are going unheard — and we had to take a stand too, the best way we know how: film.

Diving deep into the complexities of slavery introduced us to even more new characters that you’ll see in the film. Paul Rice, founder and CEO of Fair Trade USA explains how a fair price for products is what we all must demand in order to keep the slave trade out of communities. Maurice Middleberg, director of Free The Slaves talks in-depth about how people are lured into slavery, and what their lives are like after being freed.

At one time or another, all of these people didn’t know. They didn’t know that slavery exists, but when they found out they took a stand to do something about it. Someone else noticed that stand, and they went above and beyond expectations to do their part. 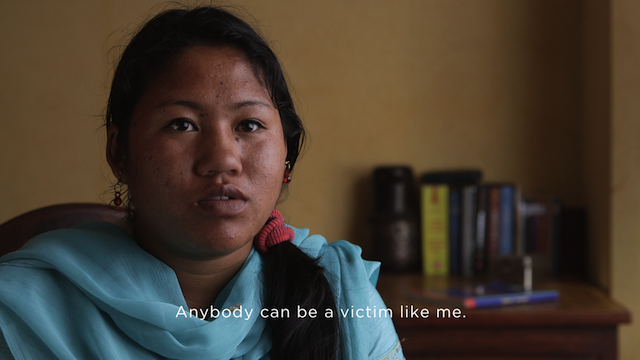 To tell this story right, we had to hear from people who have lived this nightmare. In this film we travel to Ghana, Nepal, and the Dominican Republic to speak directly with children and adults about their experiences being enslaved. Finding these people and making sure that everything came together in time to tell their stories was such a challenge… but their voices are so completely necessary in order to really tell this story.

It’s hard to put into just a few words why we are telling this story, but, the bottom line is: slavery can only end if more people find out that it’s happening, and of those people more brave and inspired souls come forward to take a stand against something they know is wrong.

This film is our way of telling people and giving them the tools to do something about it.

Now for the super exciting part: we’re hitting the road in February 2014 to premiere the film AND conduct one-day filmmaking workshops in 30 cities across the US and Canada.

The truth is, making this film has lit a whole new fire under our asses to get out there and talk to other filmmakers about what it means to tell a story that you really love. We put a lot on the line to make #standwithme, but there was never really any question as to why we kept going. We believed in the story, plain and simple.

The #standwithme Premiere Tour, where we’ll be hitting the road and taking the film to 30 cities in the US & Canada. This film is our baby and we couldn’t be more pumped about getting it out there and showing it to the world. But we’ll be the first to admit — it’s a bit nerve-wracking. As a filmmaker, sometimes there’s nothing harder than taking your work and showing it to someone.

What if they don’t like it?!
What if no one comes?
What if we no one cares about slavery?!

These are all thoughts going through our mind… but the subject matter of this film is so important that you can expect to see us pushing this premiere like our lives depend upon it — because honestly, they do! We really believe in this project and how much of a difference this story can make in the fight to end child slavery.

The Storytelling With Heart Filmmaking Workshop!

The Storytelling With Heart Tour is a one-day filmmaking workshop all about how to use your talent and passion as a filmmaker to tell the stories you REALLY want to tell, and tell them powerfully.

The workshop will take place on the day following the #standwithme premiere in each city.

How did we go from doing wedding films to our own original, independent feature?

What did we change about the way we were running our business and our shoots in order to transition into a company that tells the stories WE want to tell?

How did we even go about funding something this massive?

And most importantly… how’d we solve all the problems we encountered along the way?

Tickets to these tours are sold separately — meaning you can attend one without attending the other. However, attending the premiere is strongly recommended for anyone attending the workshop, as we will be using the documentary as an example in many of our discussions.

We’re coming to a city near you: 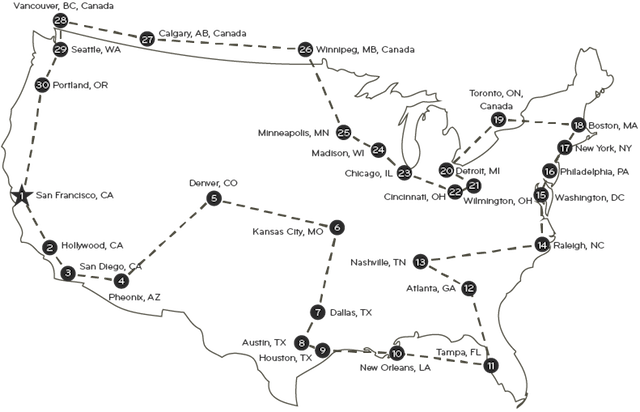 This is all VERY EXCITING and we’re kind of freaking out around the studio, getting ready for all the madness that is about to happen come February.

We want to see you there. Both the #standwithme Premiere and the Storytelling With Heart Tour are going to be buzzing with filmmakers and passionate storytellers, and our team is currently dying to hit the road and talk about all the details that went into this project.

For more information about the #standwithme Premiere, visit the shiny new website.

There are all kinds of ticket packages available for attending the workshop. There are group packages for crews, varying single attendee options, and with the holidays around the corner we’ve got a special deal that you can wrap up and put under the tree.

***SPECIAL NOTE: If you want to be a part of the magic behind the Storytelling With Heart Workshop Tour, visit our Street Teams page to find out how you can get involved!***

What do you want to hear from us?

You all know we love sharing our process and discussing all of the ups and downs we encounter during our filmmaking. We do it because we believe that powerful stories can change the world, and we want to be active members in a community of filmmakers who share our feelings.

Our workshop tour is just one way of doing that. But in the coming months we’ll be posting on the blog, holding webcasts, and releasing all kinds of BTS info about how we made this movie!

After watching the trailer — what are you curious about? What questions do you have and what advice to you have to give?

We want to hear about all of this stuff and discuss it right here, with our whole community. We couldn’t have done any of this without all of your support, questions, advice, and inspiring feedback.