At Stillmotion, we are always under tight deadlines, but not like this.

Picture this – you’re an editor with a crew that has two days to produce, direct, shoot and edit a short film that will be seen by millions exactly 48 hours after you have the concept. From start to finish, and with not even an inch of wiggle room if something goes awry.

If you’re Adam Epstein, editor for Saturday Night Live’s film unit, this isn’t an every once in a while-type event. Every single week, Adam has less than 24 hours to turn around an edit that’s ready for broadcast just in time for SNL’s iconic “Live from New York…” to hit the airwaves. As Lorne Michaels says, “It doesn’t go on because it’s done. It goes on because it’s 11:30.”

After five seasons of this madness, Adam is hitting the road this summer on MZed’s The Cutting Edge Post-Production Tour to share the methods, theories, techniques he’s developed while editing in a lightning-fast turn around environment like SNL.

We had the privilege of being able to check out Adam’s workshop when he came by Portland, and it’s seriously awesome.  The workshop delves deep into the technical side of things, but what makes it every cooler is that Adam shares a lot about the art and soul behind what makes a good editor, too.  As Adam says in his workshop, being an editor today encompasses so much – you have to know how to cut, know rhythm and story, be a compositor, a sound designer, a motion graphics artist, and maybe more importantly you have to be able to deal with people. But, according to Adam, none of that is as important as the why – the overall feeling and bigger picture of what you’re trying to accomplish.

We had a chance to ask him first-hand how he turns around hilarious, memorable work, and stays sane in the process.

Here are five tips, straight from the man himself:

“We don’t know what we’re doing until Wednesday night so they pre-produce everything on Thursday. It’s crazy. It’s all sets, locations, permits, wardrobe, extras, camera package, everything. And that’s every week. And then they don’t start shooting usually until Friday, late afternoon. Everyone in the film unit is just incredible at what they do, which is very necessary.

“If we’re starting really late, I’ll usually start on set, if we’re not bouncing around to a lot of locations. Just to get kind of ahead of the game. So as they’re breaking camera, I’ll be starting just on a laptop, starting to break stuff down and organize, and pull selects. And then I’ll usually go until like 3 or 4 in the morning, and then sleep for a couple hours and then come back.  I’ll just start working ahead until I have a basic assembly and then we’ll start going through stuff. The writers will usually come in around 1 o’clock and we tweak it and kind of get it actually to a place where it’s watchable.

“We’ve done it enough now. It’s always nuts; we’re never finishing early. It’s up to the last second every time.  But that’s just because there’s always more we could be putting into it. Like people say, “when do you know it’s done?” It’s never done. It’s done when it has to be kicked out basically.”

2. The team is more important than the tools

“I can’t stress it enough—the only reason that anything I work on looks good or feels good is because the people I’m working with are so, so good at what they do. And a lot of times, especially now, everyone is like, “I’m a one man band!” out of a laptop.  That’s true – you can do amazing stuff now. But I would say, spend half the money you’re planning on spending on gear and get a good sound guy, and get a good wardrobe, or scenic, or art director to work with, because then you’ll actually be shooting something that looks good. Then you’ll have good footage.

“A lot of times people find out new tricks, and new tools, and everyone loves new plug-ins, but if you’re not using them for a specific reason then it’s kind of pointless. So, know all the technical stuff but that should always be in service of the bigger picture.” 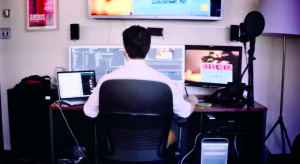 3. Cut on what works for you

“I talk about this in the class a lot – whatever you like cutting on, use that. No one will be able to look at the final thing and be like, “yeah, I can tell that was cut on Final Cut X.” Doesn’t make a difference.  If you like it, then you can get your work done. We work on Premiere and all Creative Cloud now. Just based on it makes the most sense for our workflow, because we’re shooting on literally everything. But again, they’re all wonderful, wonderful programs. You can make amazing stuff with them. Go to town.

“People get into NLE flame wars, and this, this, this, is better than that. But you should be looking at overall story and vibe and that’s going to be the thing that’ll get you further in your career than being really fast on the keyboard, truthfully.”

4. Have a plan, but be open to trying something new

“Be open to trying stuff and when something that you might not have planned happens don’t necessarily think of it as a mistake. Try to see that open-mindedly. A lot of the time those happy accidents are the things that are great because they’re coming from a more subconscious level. You didn’t sit down at your desk and say, “all right, I’m gonna come up with a great idea now.” Because often times that’s hard to do. It’s hard to sit down and have a planned, natural, great idea. Obviously, have a plan, but don’t get locked into it. Often times that’s where the best stuff comes out.”

“With editorial, it’s hard to really break it down scientifically.  Like, why is this better than that? Or why does this timing feel better than that? We can talk about the structural rhythm, but so much of it is instinctual.

“So much of it is being mindful, like when you’re watching things and if you enjoy something, for example. If you can watch stuff more carefully and see the bones and the structure that goes into something, then when you’re working on your own things you have like a grab bag to pull from, to be bringing something structural because you know how that construction made you feel. So it’s like learning rhythm in that sense as opposed to just like, here’s a book that says build up to a point, and then pause, and then kick in.

“The main overall thing, especially with editorial, is go with your gut. Go with what you think feels right. And then, the tech side will come to play, but just have a point of view. Know what you like, but be flexible within that. Have great ideas but realize that those great ideas could be stupid.”

I can’t recommend Adam’s  The Cutting Edge tour more. Go out of your way to make sure you catch it. For real.