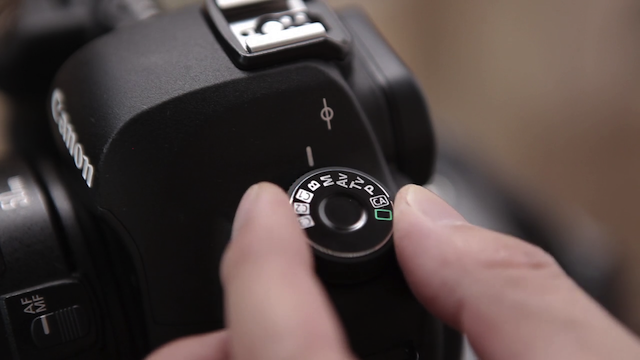 When you’re first starting out, it’s so easy to just set your camera to Automatic and let it make all the choices for you.

But that’s just a tiny robot in there who knows nothing about your story or characters, making a bunch of important decisions on your behalf.

Do you really want that?

Of course not. But like we said, it’s easy to do — because it doesn’t challenge you.

However, once you start feeling more comfortable with your camera settings and switching into manual mode full-time, you’ll really start to feel like a better storyteller with a much more unique voice.

Really, there are just six main camera settings you need to worry about when you’re shooting manually…

What are you waiting for… 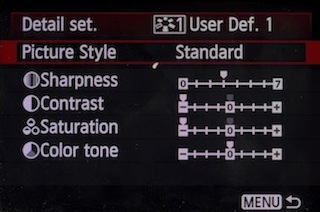 The camera’s picture profile or “picture style” is something we always set manually, so that we can adjust things like contrast and saturation to fit our story rather than let the camera automatically set it for us. By doing this we have a lot more freedom to change the look of the shot.

In the picture profile, there are 4 parameters: contrast, saturation, sharpness, and color tone.

Contrast. This is one of the most important components to focus on — and much of how we adjust contrast depends on our plans for post-production. We generally keep our contrast down when we know that we can do more in post, and that we’ll have the time and resources available to edit the image. It’s also good to keep the contrast down when light is very dark or very bright. We’ll increase the contrast to add punchiness to the image, or if we know that we won’t be spending very much time editing the image in post.

By reducing sharpness, you’re minimizing the moire, which is the effect that is created by super fine details like lines and dots that can be unpleasing to the eye.

Color Tone. To be perfectly honest, we never adjust this specific setting, because we manually adjust our color temperature by shooting in Kelvin White Blance, which brings us to our next step… 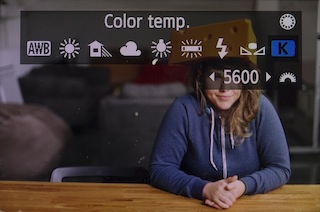 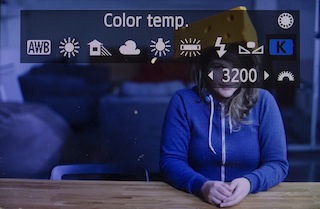 Kelvin temperature is the scale for measuring the color temperature of light, from amber to blue.

It can be hard to wrap your head around what the color temperature of a light source is, but we always remember it this way: sky high.

To balance the cooler outdoor color temperatures that we associate with sky or daylight, we set to 5600 and above.

To balance the warmer indoor color temperatures (Tungsten, incandescent, or fluorescent lights), we set to 4000 and below.

So when you go to set your white balance, you’re thinking about warmer or cooler — the lower the number, the cooler you’re making the image.

Check out the color difference happening here with this cheese hat at 5600 vs. 3200 : 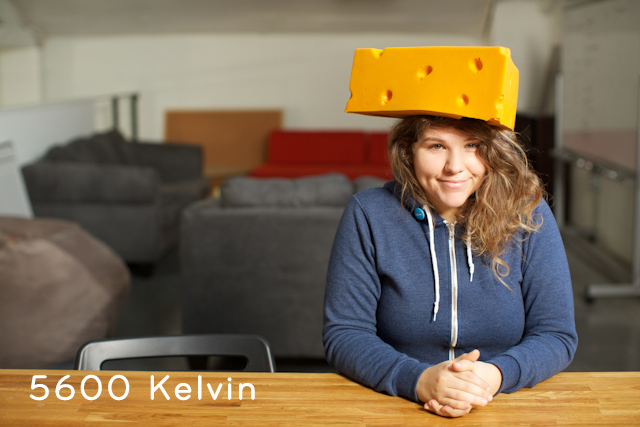 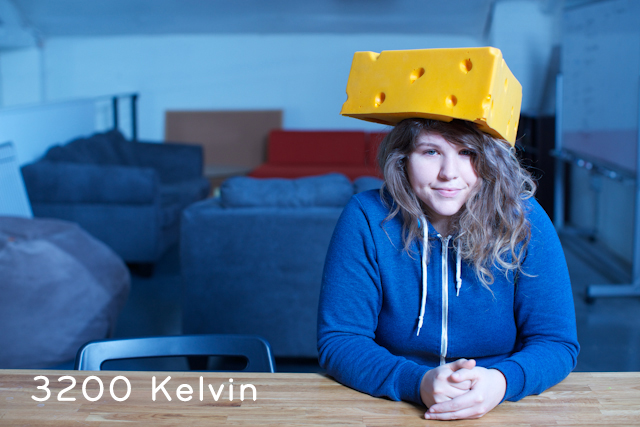 Diving into custom Kelvin White Balance can be intimidating at first, but you’ll find that when you really start looking to adjust the warmth and coolness of your shots, it’s going to empower you as a filmmaker and as an artist.

We ALWAYS double check our frame rate, because shooting at 24fps vs. 30fps vs. 60fps is going to change depending on the story we’re trying to tell.

Each frame rate accompanies a different type of shooting:

24fps: This is what we shoot in most often, because it’s the closest to how our eyes see things in real life (or so they say). This is a more filmic look, it’s usually what we prefer unless we’re shooting for slow motion.

30fps: This frame rate is more of a home video feel, and it’s not one that we shoot it too often but really it all comes down to visual preference. A lot of people like to shoot in 30fps because they prefer the way it looks.

60fps:
We shoot in 60fps if we’re shooting for slow motion. The C100 doesn’t shoot in 60fps, so checking the frame rate on this camera is only a matter of choosing between 24 and 30.

The best way to explain the last 3 camera settings on our list is to talk about them all at once, because in order for one to do its job, they all must coexist in three-part harmony. 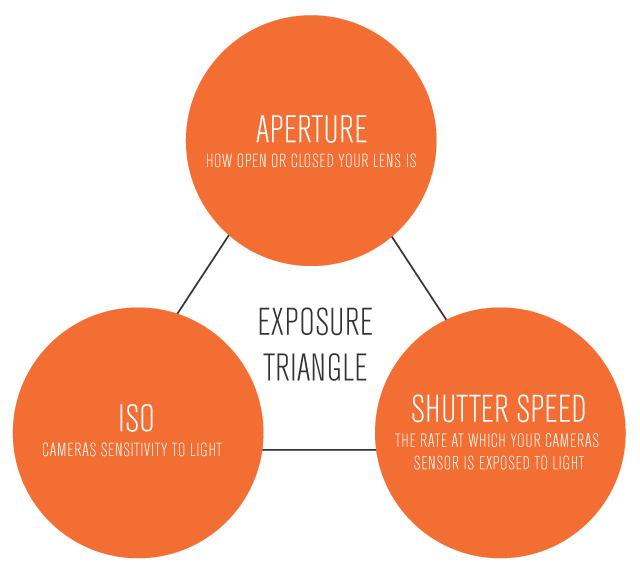 This is what is known as the exposure triangle, and by setting it you’re changing the amount of light your camera is exposed to.

Aperture is how wide you open up your lens. If you’re in a darker space and need to let more light in, you’ll open up your aperture to expose the sensor to more light. Some lenses can open up wider than others — if you want a lens with an aperture that can give you lots of options, you’ll want something that can range anywhere from f/2.8-f/1.2.

By opening or closing the aperture, you’re affecting the depth of field in your image. The wider open you’re shooting, the shallower your depth of field is going to be, giving you a lot more blur in the background and foreground.

Take a look at the difference between a wide open aperture and a smaller opening: 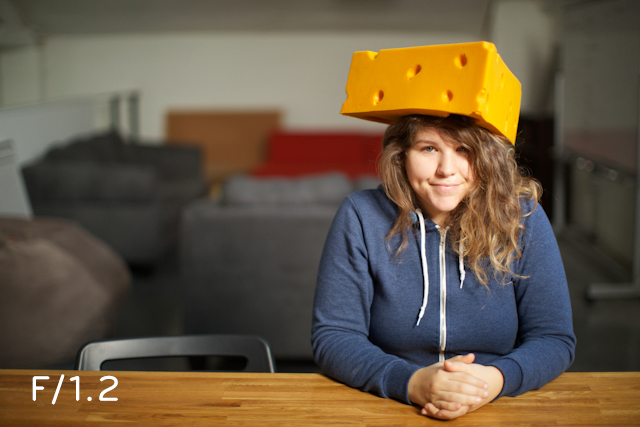 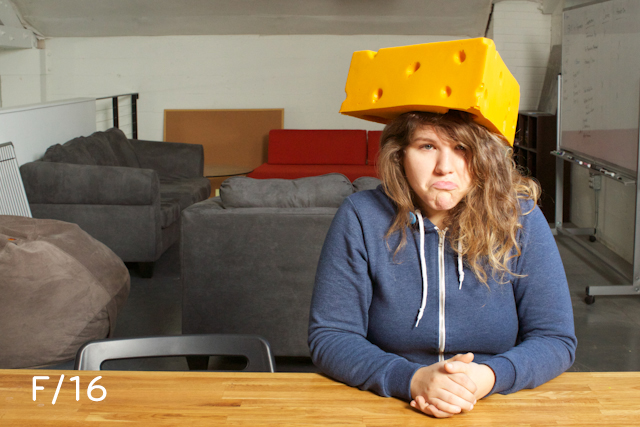 While aperture measures the amount of light you’re letting in, ISO is what measures your sensor’s sensitivity to that light, which brings us to our next member of the exposure triangle…

Being that the ISO dictates the sensitivity to light: the higher the ISO value, the more sensitive your sensor is, and the brighter the image will be.

The “normal” range for ISO is around 200-1600, and you adjust this based on the brightness of your environment. So for example, on a super sunny day you’re going to set a lower ISO, around 200 or 100.

As you increase your ISO and go higher, you start to introduce what is called noise, which is a grainy texture over the image that is generally undesirable.

Shutter speed is the amount of time the shutter is open and exposing light to the sensor.

Shutter speed is measured in fractions of a second: 1/60 means that the shutter is open for one sixtieth of a second. A speed of 1/500 is faster, and 1/10000 would be like… really fast.

The faster your shutter is opening and closing, the less you have to worry about motion blur in your image. But sometimes you might want motion blur, in which case you’d slow down your shutter speed.

When it comes to choosing shutter speed, our general rule of thumb is to choose a speed that is twice our chosen frame rate.

But how does that affect the rest of the triangle?

With shutter speed, ISO, and aperture all working together to create a balanced image, you’ll often have to favor one depending on the type of shooting you’re doing. If you’re wanting a slower shutter speed to capture some motion blur, you’ll probably need to stop down to a smaller aperture.

Conversely, if you’re wanting a wide open aperture for a shallow depth of field, you’ll have to keep your shutter speed faster to favor the aperture.

Before we actually check any of these six camera settings — before we even pick up our cameras — we first check to see if we’re putting story first.

By focusing on the story, we can actually have real reasons behind our choices for our six settings:

This is ESPECIALLY true when we aren’t shooting in RAW, and our freedom in post production is much more limited.

It’s always valuable to feel comfortable shooting in manual and allowing yourself the creative freedom of choosing your camera settings rather than allowing the camera to do it for you automatically — so we want you to push yourself to start using these settings if you aren’t already.

It’s only going to make you more advanced filmmaker in the end, and you’re going to tell deeper stories.

Do you always check these settings before you start shooting?

How do you adjust them depending on your environment?