In fact, I typed that verbatim in a previous post about observing your audiences’ actions in order to gauge what they believe or how they’ll act on something.

But today, I’m going to ask you to turn this concept back on yourself.

Have a look at this 2 minute video, and then let’s discuss.

First off, wasn’t that uh-may-zing? Kudos to the team who was responsible for this masterpiece.

Alright, now go ahead and scrub the playhead to 1:03.

Up until that point in the video, we’ve heard about Mr. W’s troubles. He’s misunderstood. He doesn’t fit in. He’s lonely. And he can’t figure out why.

I’m betting not. But why not? After all, he a likable character and he hasn’t given us any reason not to trust him. So why don’t we buy it when he tells us that he’s gotten used to being unliked?

It’s because of what we’re seeing at the same time.

As he begins saying the line, we’re taken to a visual of him walking on an empty pathway, kicking a box along the way, and swatting at a leaf with his right hand in frustration.

What we see is in direct contradiction with what he’s telling us in that very moment.

His body language, the way the scene is shot (wide from above), and even how the footage is colored, all suggest that HE’S NOT USED TO IT WHATSOEVER.

So we don’t buy it. We’re convinced more by his actions than by his words.

It’s about what psychologists call paralanguage, the components of language that aren’t verbal.

As Earl Stevick said in his book about language acquisition,

Maybe more precisely, Ray Birdwhistell stated in his work that,

“probably no more than 30 to 35 percent of the social meaning of a conversation or an interaction is carried by the words.”

(See here for the details & citations.)

But we’re not just talking about body language and gestures here. We’re also talking about visuals in general. Whether we’re making a film, decorating an office, or writing a blog post such as this one, showing something means providing proof. By giving people something to back up the verbal (or written) claim, there’s more weight behind the message. (Stay tuned for Part II where we’ll talk about thought ownership and how showing can make your audience feel extra clever.)

Take this blog post for example. I could have just written a bunch of words saying that science shows that non-verbals are really important. But that would have only gotten us so far.

Note that there’s an example in this post. By using the Mr. W video as proof of the idea, we’ve added evidence to the message. And by doing that, chances are, you (the audience) are much more likely to come away from this post feeling like you got a valuable, factual piece of information that you can use for yourself.

But wait. Have we gotten there yet? How can you use it to your advantage exactly? 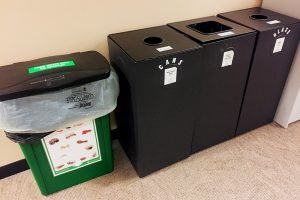 A few weeks ago, I was collaborating with an energy company that was working on a renewables initiative themselves. They were passionate about the project and it was clear that they were excited about making the world a better place.
One day when I was visiting their office, I passed their kitchenette area and was pleased to see a variety of bins lined up against the wall. (I won’t tell you what they were, I’ll let you see them for yourself in the picture). I thought, “this is great, they really do walk the walk!”

But the following week, I was back for another visit and as I walked up to their reception area and was escorted to one of their meeting rooms, I was offered a water. A water.

What’s the difference between these two statements:

This is a pic I took with my phone as I was waiting for my client to join me. Not good, right? And while it didn’t make me question the dedication of the team I was working with per se, it did make me worry about their image in the eyes of others. What if one of their competitors ever visited them at the office? What if a bottle of water were to be offered to an environmental activist while the company was campaigning for sustainable energy production?

It was a contradiction. Their action, small as it was, could leave a big mark on someone who wasn’t willing to give them the benefit of the doubt.

I’ve never received a water bottle from them again.  🙂

My challenge to you:

I invite you to take a look at how you communicate. Whether you’re a marketer, a filmmaker, a volunteer with a non-profit, or a Fortune 500 company.

Are there unintended contradictions in the way you communicate? Could you be walking the walk better? And when given the choice, do you show and not just tell?

No matter how well defined our core values are or how well we communicate what we’re about,the way we act will always supersede what we say. If the two are in alignment, it’ll build trust. If they’re not, we risk destroying that faith.