It’s inevitable. At some point in our lives, we’re going to encounter a cheater — someone that’s willing to win at any cost, even at the expense of their integrity.

It happens in business, politics, sport… Humans are both social and competitive, and sometimes those two qualities get in the way of each other.

I came across a blatant cheater at a tennis competition today, and it got me drawing parallels between athletics and business. Especially, as an honest, keep-her-promises kind of person, I couldn’t understand why anyone would ever want to win by cheating. And then I remembered, for some people, winning is the priority above all else.

Let’s talk about you for a sec:

1. Some of you reading this are non-cheaters. You take pride in the fact that whatever success you experience in l attained fairly and honorably.

2. Some of you are cheaters to varying degrees. Some will freely admit that cheating is a part of life just like the need for food and sleep, and that those who don’t cheat are suckers. I’m going to assume (if only for my own sanity) you are in the minority.

3. Others may cheat once in a blue moon, but still identify as non-cheaters. Seemingly a contradiction, right? Human beings are experts at rationalization though. We can easily look back at our actions and justify them in a way that paints a much rosier picture… and then we believe it. Truly. We aren’t lying to ourselves. Our brains are just REALLY good at making us feel like our behaviors are congruent with our beliefs. I bet there’s a good chance that if you initially thought you fell into the first group, you may be questioning yourself a little bit now. I know I am. 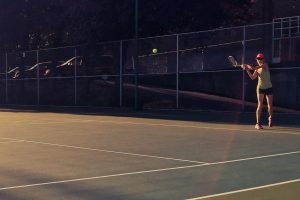 All this to say, cheating is a spectrum. This means that to assume a cheating person is necessarily a bad or greedy person, is to commit the Fundamental Attribution Error.

The FAE is defined as the tendency to believe that what people do reflects who they are, more-so than the situation they’re in.

When we look to determine (or attribute) the cause of somebody’s behavior, we often overemphasize the importance of their personality, and underemphasize the power of the situation or context. For more on the FAE in business, see my other article, The #1 Misinterpretation We Make In Biz Dev.

I immediately think back to my tennis opponent. Is she a bad person? Well, I can tell you straight, I really don’t like her.

And then a more important question dawns on me: Could I be a better person if I weren’t committing the Fundamental Attribution Error right this very minute? By deciding “I don’t like her,” without ever having had a real conversation with her, am I making the very type of mistake that, on larger scales, leads to major world conflicts? After all, if people were willing to put their assumptions aside and listen just a little bit more, we’d probably understand each other a tad better and hate a lot less.

So let me take my own advice. Instead of assuming her behavior is a direct reflection of her personality, let me brainstorm some situations that could be responsible for what I perceived as “cheating.”

People prefer avoiding losses to acquiring equivalent gains. In other words, it is better to not lose $5 than to find $5.

As psychologist Daniel Kahneman points out, fear of loss is a way bigger driver than the desire to win, a fact that had direct implications in my tennis match.

When did my opponent start cheating? Not right at the beginning. And not right at the end either. She started making bad line calls right when the score was changing from relatively even to tipping in my favor.

As soon as she started feeling the possibility of loss, the “bad” behavior began.

And by “bad,” what I really mean is “inaccurate.” For a moment, let’s give her the benefit of the doubt and assume that maybe something got in the way of accurate perception.

Can fear affect the senses?

It is a widely observed clinical phenomenon that people with extreme fears experience perceptual distortions. (Source)

So it’s possible that she wasn’t cheating at all. Instead, her brain could have unquestionably seen the ball differently than I had, in which case, it would have been her legitimate call to make.

It’s conceivable that she was being honest the whole time.

A question of free will

There’s a psychological study that looked at whether a person’s beliefs about free will could affect their tendency to cheat.

Participants in one group were given some neutral text to read, while the other group was given text that encouraged a belief in determinism (basically the opposite of free will — that our behaviors are determined by factors outside our control).

Those who were exposed to the deterministic message CHEATED MORE! It turns out, believing that we don’t have much agency over our actions can make a big difference in how fairly we behave.

I guess it makes sense. If we can place blame on external factors for our dishonesty, it becomes “not our fault,” making it easier to commit.

I’m not even going to pretend like I’m an expert in Theological Determinism, but it certainly does make me wonder…

Is my opponent the type of person to say, “everything happens for a reason?”

I’ll admit, writing this article has been therapeutic for me. By taking some time to consider the other person’s perspective, and to also push past my own biases and dig into a bit of human psychology, I feel less angry.

Instead, I feel more compassion for her.

For all I know, she could have a deterministic life view with a crippling fear of loss that changes the way she sees the world. Maybe it’s a daily struggle that affects her relationships, her self worth, and ultimately, her health.

Either way, I won the match. And I won it fair and square.