Breaking Down 3 of Our Favorite Scenes from Our Journey Home

Last week we shared our latest documentary, Our Journey Home. It explores just how huge a role home has in shaping who we are.

Now that the film is done we wanted to take a moment to share some technical notes regarding the piece with all of you.

First we’ll share an overview of the gear we used and briefly go over how and why we used them. From there we’ll break down a few of the key scenes that we enjoyed the most, and share some insights about what we learned in the process.

Ready to nerd out with me on this tech talk? Let’s do it.

In telling any story there are a million decisions that need to be made to get from concept to finished film. The trick is making those decisions with consistency.

Lighting ratios, shutter speed, camera choice, lens choice, movement, frame rate, white balance, picture profile, aperture, composition and on and on and on—there are a million decisions made in every..single..shot. Then compound that by the number of shots that make up a feature length film and you’ve got one heck of a decision matrix to sort out. 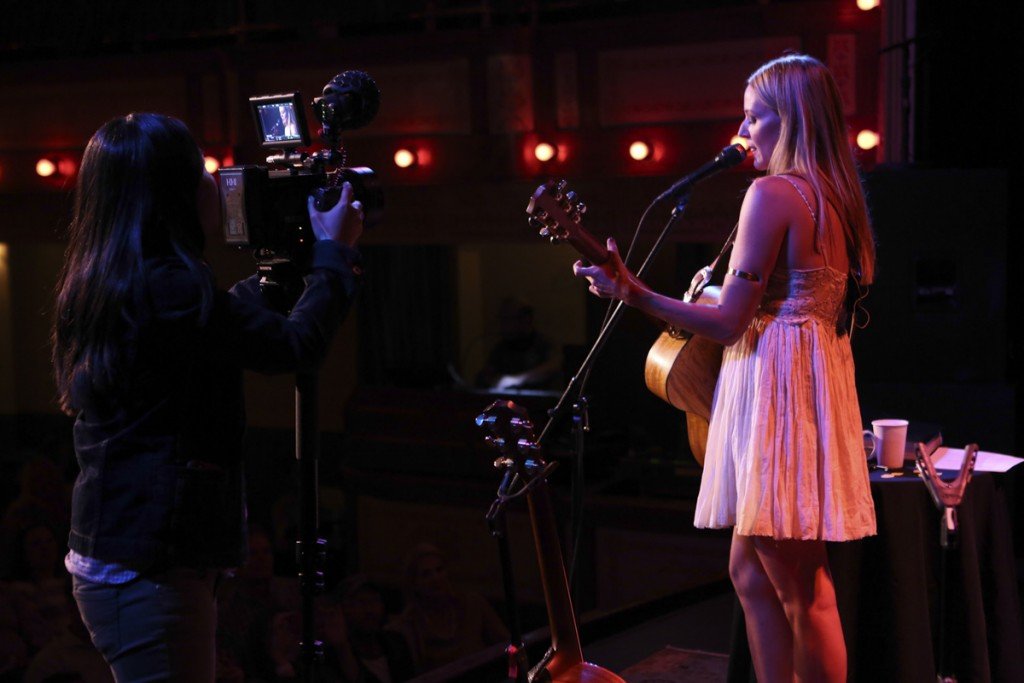 Whether you realize it or not, the technical choices you make all add up to represent a particular perspective of the story.

Think about it this way. Each component that goes into a shot, each one of those million decisions, is a layer in the film. The more your layers that point in the same direction—the more they resonate, and the stronger your film will be.

But how often do we press the record button before fully considering all the options?

Now let’s be realistic, you can’t consider every option for every decision for every shot. It’s just not possible. But the more we realize how our choices impact the story, the more decisions we can make ahead of time, and the better we’ll be able to react to the unpredictable.

So how do we make all those decisions with consistency?

Our Journey Home was made with Muse, our storytelling process, and we use a set of 5 keywords as a filter to keep us aligned with our purpose. From locations to characters to lighting setups and camera selections we always fall back on this set of keywords to help us make decisions in a story-relevant way.

These were the keywords that our team and the client agreed on together. Those are the 5 keywords that define what we are trying to say—what this documentary is all about.

As the DP, it was then my responsibility to take those keywords and blend it with Patrick’s vision, effectively interpreting emotion, personality, and purpose into technical decisions.

That isn’t an easy feat.

See, it’s natural to be drawn to the beauty of an image. The magic of lens flare at golden hour, the epic-ness of a glorious aerial, or the ever elusive floating dust particles suspended in the air.

Beautiful cinematography isn’t about making a beautiful image, it’s about making the right image that serves the story. 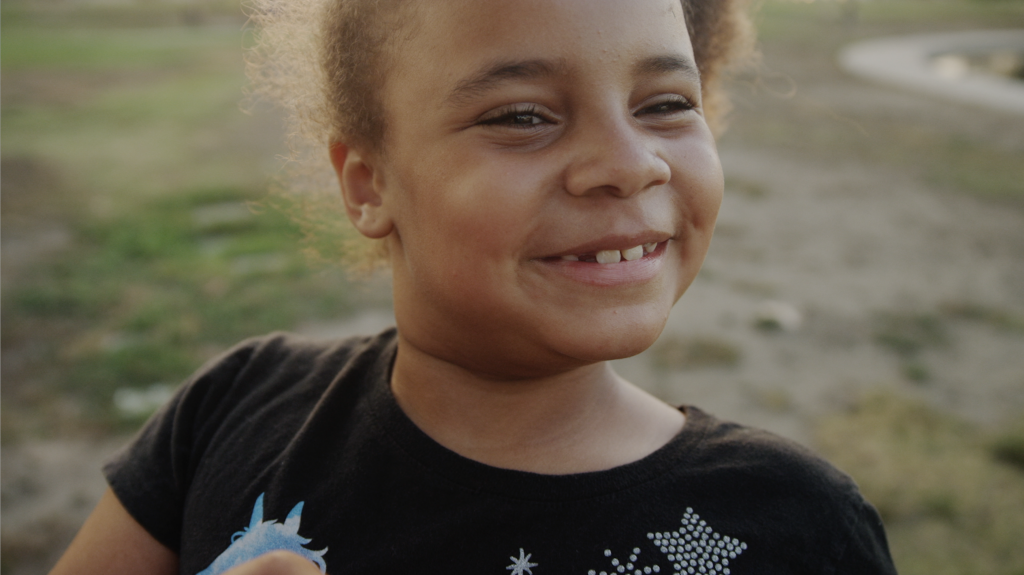 When we set out to tell this story, one of the first big decisions we made was which camera we were going to shoot this film with. It’s a huge decision and affects many other parts of production (like lens choice, lighting packages, speed) and post-production (storage space, editing workflow, color, etc.).

Looking at the set of keywords, we see a wide range of emotions and feelings. Home (and the lack of home) lie at two opposite ends of the spectrum when it comes to the look and feel of the visuals. Lost is cold and negative, while Empowerment is inspiring and positive. Awareness and Bridge are more neutral and impartial.

Our keywords mean we need a camera that can help us create drastically different looking scenes with a modest budget, short timeframe, and often with minimal crew and lighting.

After all, this is a documentary that explores homelessness so there were no retakes or ‘back to 1s’. Additionally we were regularly faced with harsh and unpredictable environments, often with very little time for setup. 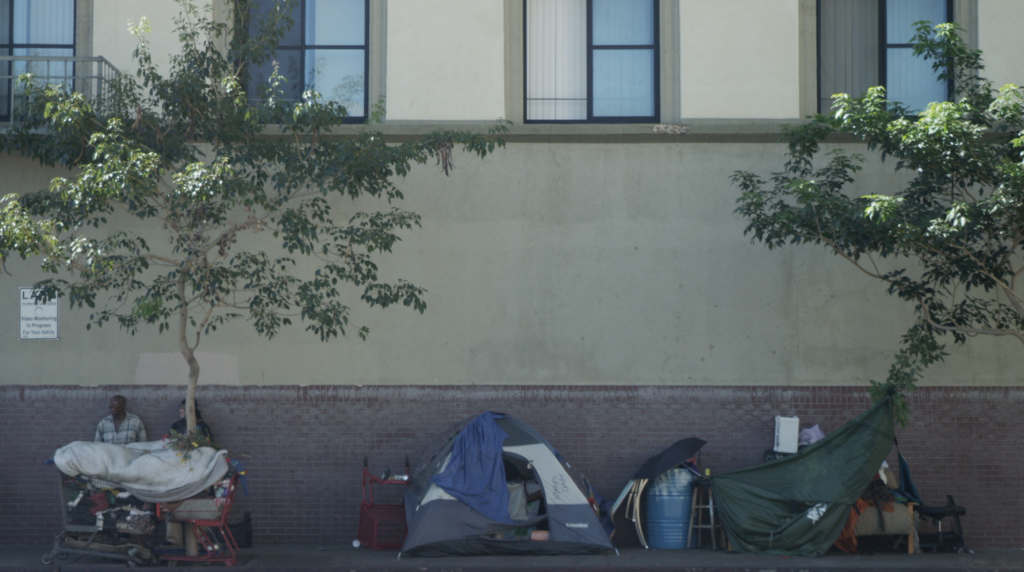 Because of that, we elected to shoot it primarily on the Red Epic, offering us both incredible dynamic range to handle less than ideal lighting conditions and a RAW codec to really push the image in post-production.

Some might argue that the Epic is too big, too heavy, and too slow for live-event documentary work but we found the size and functionality to be a perfect fit. 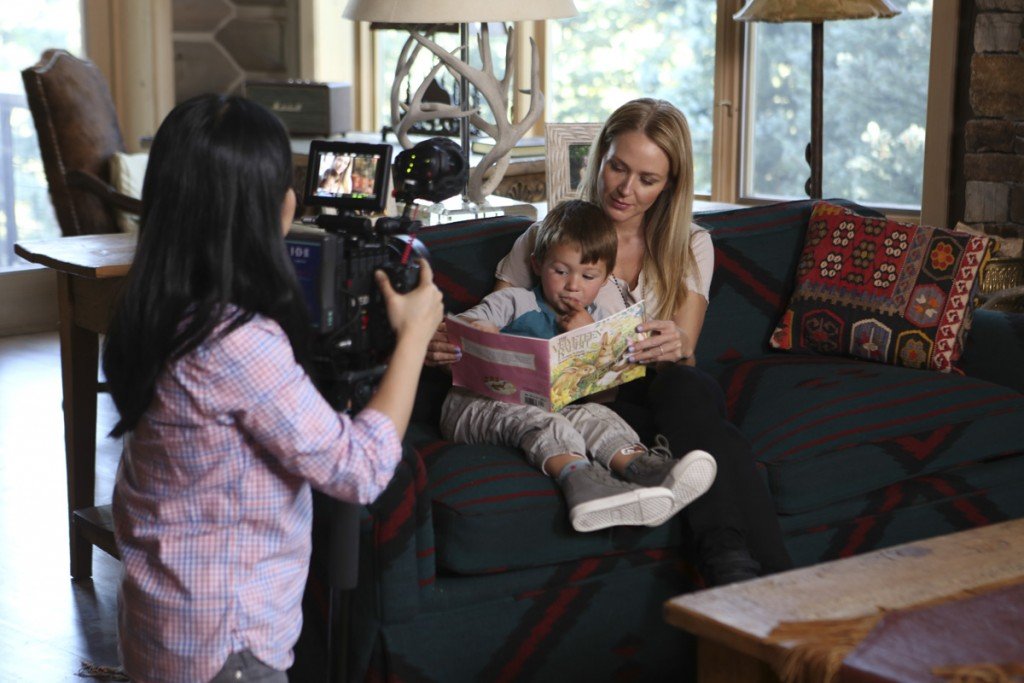 Typical setup of the RED Epic on this project:

Stripped of the luxuries often found on narrative and commercial sets we were able to keep the camera package small and mobile, allowing us to maintain a small footprint and stay nimble like a ninja.

Once we’ve selected a main camera we then need to pair it up with the proper camera movement and lighting for all the different mini-stories told within this longer feature. 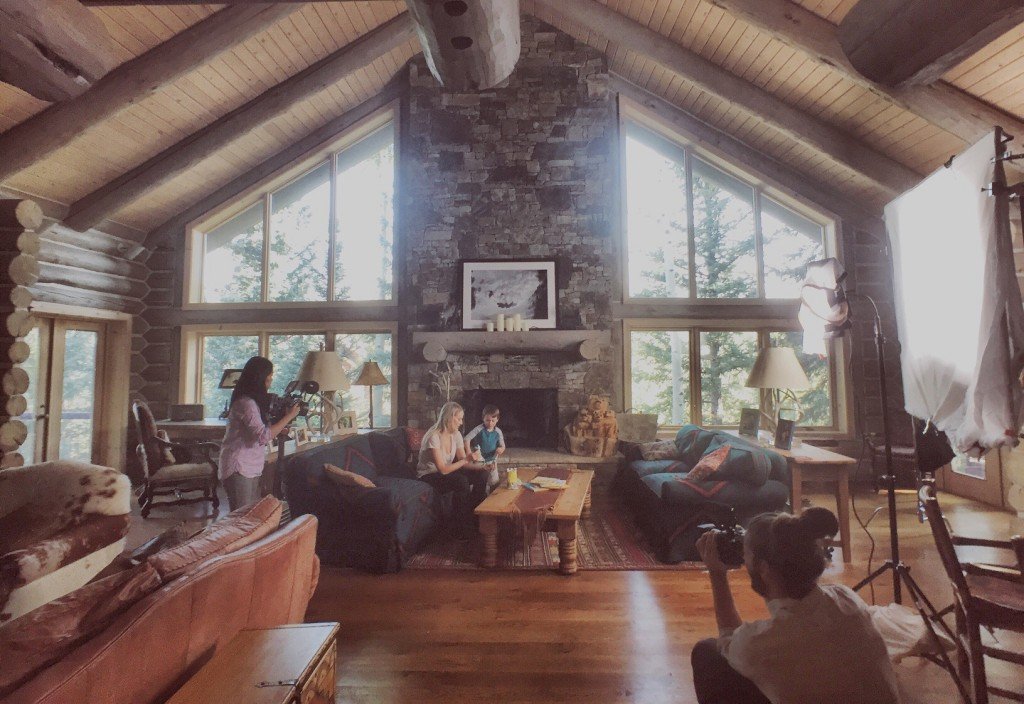 We leaned heavily on the keywords and made specific selections based off which keywords a particular scene represented.

In a loving, supportive environment such has a home or school we:

We then contrasted that with the harsh homeless conditions on the street with: 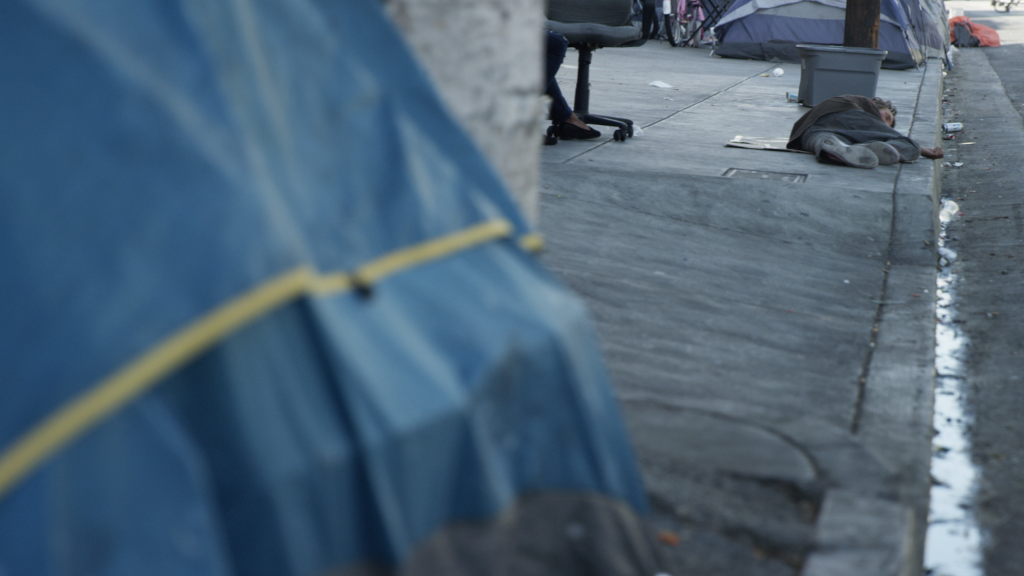 If you find this helpful, you can download the full 25-page style guide at the bottom of this post for more in-depth notes on technical choices.

But before we get there, I’d love to share with you 3 scenes from the film and look at how we shot it, why we made some of the decisions we did and what we learned from each one.

In the ending scene, where Byron is mentoring the kids, we were in a relatively small room for four kids, Byron and his entire family, plus the crew. Those of you who have experience in lighting know that the smaller the room, the more difficult it is to light. In addition to that, we flew in the day of the shoot and had minimal setup time.

Yet despite all of those challenges, this scene is one of the most powerful ones in the entire movie. Not because it was inspiring, and not solely because it looked great, but because it felt authentic. And a huge part of what made that successful was because it was covered naturally, with no retakes, no stopping, one camera coverage, and in a scene all lit by one light.

Looking at our keywords this one definitely screams Empowerment, and we wanted it to be full of hope and inspiration. That mean we wanted bright, soft daylight to represent the vast opportunities that lie ahead for those kids.

In order to achieve the look and feel we wanted within the time and space constraints we opted to use just one larger light source, the Profoto 800W HMI, to light the entire scene. We walked in and listened to the light before deciding to place the HMI outside the window so we are keying with the natural light, not fighting it. We then rearranged some of the furniture, pulling it off the walls to create a bit more room and depth. All of this, in under 45 minutes.

There are several bonuses for doing it this way:

Lighting a set is like traveling from point A to point B. There are many paths that can get you there, but there are certainly ones that are more efficient, more fun or more challenging.

And speaking of different paths, this next scene was a fun one to tackle. For the opening of the film we were invited into Jewel’s house to conduct an interview with her, where she was directly addressing the issue and inviting viewers to watch the film. Because there is a direct call to action it’s best that she speak directly into camera; it also has the added benefit of distinguishing it from the interviews in the film itself which are just slightly off-camera.

For anyone who’s ever tried to look and speak into the barrel of a lens you know how difficult this is. It’s way easier talking to an actual human. This is the first thing people see—and it’s massive that she is comfortable and can make that emotional connection with the viewer.

So what do we do? We bring a custom iPad interrotron!

Yep, it looks and sounds scary but it’s really not. First developed by documentarian Errol Morris, this new version runs on iPads and is much more streamlined. It’s basically the same as traditional teleprompter setups except instead of text, Jewel sees Patrick, who’s interviewing her, on the screen. When she looks at him, she’s actually looking right into the lens.

Here’s what we used:

And you know what, at the end of the interview Jewel made a comment that in all the hundreds of interviews she’s done she’s never done one like this, that often times directors would just ask that she do her best to look into the camera—and that this was a much more pleasant experience.

Another experience I will never forget is our time with Rosalio in the ride along with the police car. If we were on a Hollywood set doing a car scene we’d likely have multiple cameras mounted on the car, one mounted on a jib on an SUV and possibly even aerials with a real copter and gyro.

But this isn’t a Hollywood set and we certainly don’t have that kind of budget. 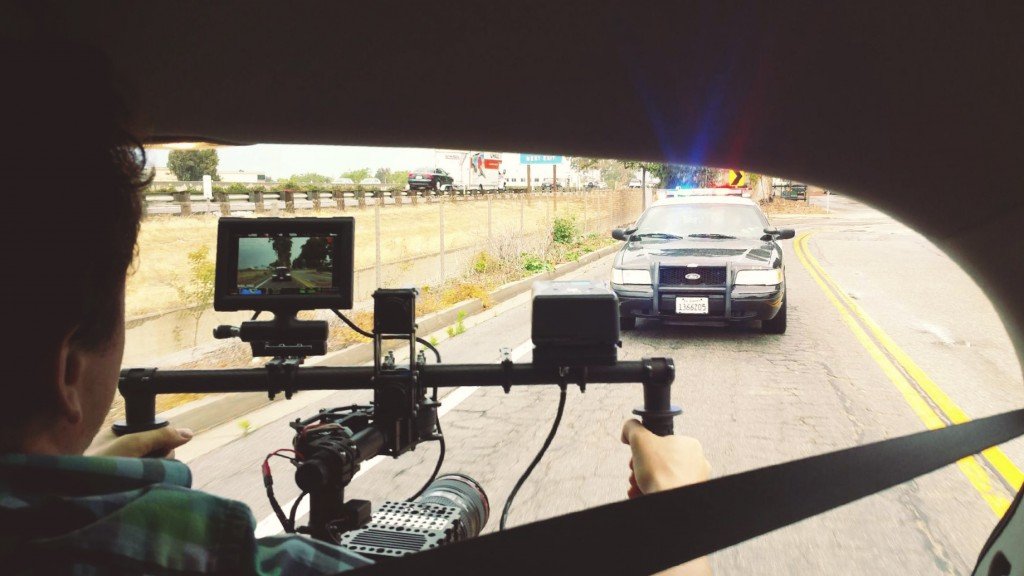 Those of you who know us know we regularly hang out of minivans and out the back of SUVs. That’s pretty much standard protocol for us. While we don’t recommend that to anyone and we always stress the importance of taking proper safety precautions it is a remarkably low-cost and effective way to get smooth tracking car shots.

Doesn’t that look fun?! We had SO much fun.

Well it was all fun and games until I asked Patrick to drop low and skim the pavement to do a mock jib shot, bringing it up from the ground for more movement…..and we run over a puddle.

I didn’t realize it at first but as the camera came up I realized it was SOAKED  in dirty rain water.

My heart skipped a few beats. Panic set in and both of us hailed “May Day!” for Maribeth to stop the car so we can do a wipe down. Luckily for us after some hair dryer action back at the hotel the camera was as good as new.

But you wanna know what the coolest thing was?

You don’t have to worry about getting pulled over for filming out the back of a car when you’re filming WITH the police!

Thanks for joining us on this journey to make this documentary. It’s always challenging taking on large projects like this and it’s so wonderful to have the support from this community. It means the world to us to be able to do this and share it with you.

Oh and don’t forget, here’s the free style guide available to download for those interested in learning more about how we shot the doc. 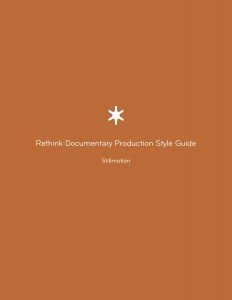 And in case you missed it last week, here is the full film Our Journey Home.

Share your comments or questions about Joyce’s approach to these scenes from Our Journey Home in the comments below!