A Ninja’s Go-To Guide For Lenses

Lenses present a conundrum for the ninja.

When you think of being stealth, strategic, and staying a step ahead the first lenses that come to mind are likely going to be zooms. And it’s true, they do offer all of this.

Primes may make you slower, you may miss things, and you may often feel like you’re a step behind. But primes train the one thing that ninja filmmakers can never underestimate: their mind.

Primes will teach you to predict where you need to be before something happens. If you don’t…you’ll miss it. They’ll help you connect focal length to a feeling or a personality. After all, a 24mm in close says something entirely different than an 85mm from far away, even if you have the exact same things in your frame.

We recommend starting with primes to really get comfortable with moving to get a shot, relating focal length to a feeling, and needing to really think about what lens you want and why. As that becomes more second nature, we’d move into a mixture of primes and zooms.

So here you’ll find the best primes and zooms for ninja filmmaking, and ones in every price range from beginner to advanced.

When ninjas train to be stealth they learn on prime lenses but as they mature, this trusty zoom lens is a must-have tool that never leaves the ninja’s side.

Prime lenses help teach ninjas about lens choice and composition. You have to move quickly, zoom with your feet, and be in the right spot with the right lens, or else you miss the shot and fall behind. The 24-70mm f/2.8 VII is an incredibly versatile lens with a relatively bright f/2.8 aperture that gives you a lot of options, all built into one lens.

If you’re on the sidelines of the Superbowl, hiking through the Namibian desert in Africa, or covering a fast-paced event you don’t always have the time or luxury to constantly be switching lenses. You’ll have to be diligent in zooming with your feet and remember to consider how the combination of focal length and distance to subject affects the shot, but the 24-70mm f/2.8 VII will help you stay ahead of the game.

Pair that with an 82mm thread variable ND filter to dial in exactly how much light you want to cut out and you have a small but powerful combination to use on any DSLR or mirror-less camera without built-in filters. 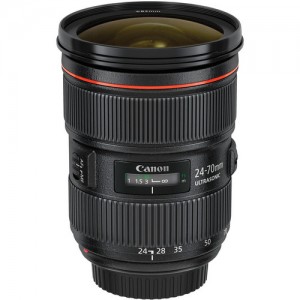 Understanding Primes Vs Zooms. SMAPP Series. from stillmotion on Vimeo.

An all-around zoom lens that covers a lot of ground, this is the lens you should carry with you everywhere.

Ninja school trains beginner ninjas on prime lenses to teach them about lens choice and composition. As they graduate to an intermediate skill level, they are granted the option of using a zoom lens, particularly the 24-105mm f/4 IS as it covers a rather large focal range and is a relatively inexpensive lens choice. With this much versatility you can be stealth and realistically shoot all day on just this one lens if you needed it.

The L-series designation signifies a professional grade optical and build, similar to that of its faster brother, the 24-70mm f/2.8L zoom. However this lens has a huge advantage beyond just the additional 35mm in focal length: it has built in image stabilization! Pair the image stabilization with the wide end of the focal length at 24mm, and you’ve got yourself the perfect lens for handheld shots on the go or in any moving vehicle. Oh, and if you’re scaling rooftops on uneven ground, the IS is great for keeping a stable image there too.

Pair it with a 77mm variable ND filter and you can easily dial in exactly how much light you want to cut out. It’s an inexpensive but powerful combination for any DSLR or mirror-less camera without built-in filters. 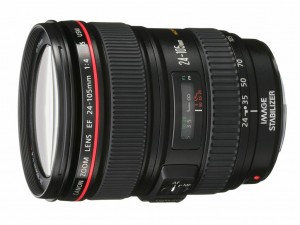 Easily one of the best lenses out there—perfect for Jonin ninjas who reach the top of their game—this is by far our favorite.

At the peak of the ninja tool spectrum lies a great tool with incredible technical advantages, in fact so technical that it’s rated on a completely different scale. Cinema prime lenses are rated as T-stops rather than the more commonly known F-stops. The difference is that F-stops are a relative measurement, it’s a calculated number whereas a T-stop is the actual measurement of light that enters through the lens—making it a much more accurate and absolute value.

This is the same unit of measure on those uber sexy $150,000 cinema lenses that big-budget Hollywood movies are made with and the 50mm is rated at T/1.3 which lets in a ton of light, making it exceptional for low-light conditions.

Most of the Canon cinema primes (24mm, 35mm, 50mm, 85mm) have roughly the same weight and size, which means you can rig up your matte box or camera on a MoVI with any one of those lenses and be able to swap them out mid-production without having to rebalance or rejig your kit. That’s a huge time-saving advantage and another stealth move to be able to quickly move from one focal length to another.

Cinema primes also have an aperture ring that allows each ninja to gradually change the aperture without the annoying and harsh incremental change that’s present with regular lenses. This means that should you encounter a sudden change in lighting condition you can roll the aperture ring to compensate for the change in exposure mid-shot! This ring, along with the focus ring, is also geared so that you can use it with a remote wireless system, allowing your 1st AC to be able to pull focus and adjust your aperture, which allows you to achieve a much more complex shot than normally possible.

We use the 50mm CN-E cinema prime often but we also have the 24mm, 35mm, and 85mm to round out the standard kit. They all share these same benefits and is a key part of our toolkit. The 14mm and 135mm cinema primes are also available. 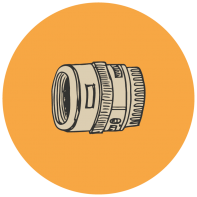 This 35mm F/1.8 is the perfect starter prime for a ninja in training.

Primes exist to help a Ninja be quicker and more intentional. Energy follows the path of least resistance, and when using a zoom, that means most of us simply turn our wrist to zoom in or out instead of moving our feet to zoom in or out. But of course, focal length is so much more than just how much you get into your frame. And even ninjas are susceptible to the laws of physics.

This 35mm F/2.0 is the perfect starter prime for a ninja in training. It’s a a great start prime for multiple reasons: lower cost, well built with a good focus ring to practice focusing manually, and offers a 2.0 aperture. While that is just over one stop less than the 35mm L-Series F/1.4, it’s awfully dangerous to shoot that wide open.

What’s the difference between the EF and L-Series—aside from a big price jump? The obvious answer is the light. The L-Series is often 1.2 or 1.4 lenses, versus 1.8 to 2.8 in the EF series. But more than that, the L-Series excels in all the factors that really make a lens: sharpness, contrast, lack of distortion and chromatic aberration, and build quality.

We chose the 35mm because most users of this lens will have a 1.6 crop (or more) camera like most entry level DSLRs are today. With the crop factor, you get something close to an effective 50mm prime, which is roughly what the human eye sees, making it a great place to start. If you are shooting with a full frame camera and looking to get your start in primes, we’d recommend the 50mm f1.8 instead.

Why we chose this lens:

Check out this nifty tutorial on why you should consider primes over zooms, especially when starting out:


Understanding Primes Vs Zooms. SMAPP Series. from stillmotion on Vimeo.