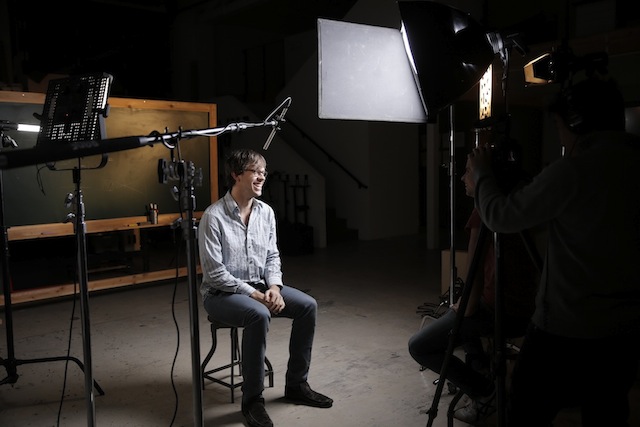 When you’re filming an interview, the audio recording of the interviewee’s voice is the most important element of your production.

That’s right, the MOST important element.

It’s so common for filmmakers to spend hours on set design and lighting and only a few minutes on audio. Without sound, all you’re left with is a talking head that does not transmit any message to the viewer.

Having a standard process in how you set up your sound recording and a standard kit of tools you will use, gives you piece of mind that the most essential element of your interview production does not effect the interview’s conversation.

While our audio setup may change depending on the environment we are in, whenever we know that we will be conducting a single person interview, we always carry our standard kit of audio tools that ensure we can record the interviewee’s dialogue in a high quality way.

Great sound quality starts with a great microphone. Just a like choosing a lens, there is a perfect microphone for every occasion. However, for single person interviews there is one type of microphone that we use 9 times out of 10.

Our go-to shotgun microphone is the Rode NTG-3. [Buy/Rent]

Without going too deep into the science of all the various pickup patterns out there, a supercardiod pickup pattern is an audio recording pattern that allows a shotgun microphone to record sound coming from one direction while avoiding prominent pickup of the distracting sounds in the surrounding environment.

In a single person interview, you should point the shotgun microphone in the direction of area around the interviewee’s chin. The microphone should be positioned as close to the interviewee as possible while staying out of frame.

Check out the positioning of the microphone in this interview we shot of Jeremy. 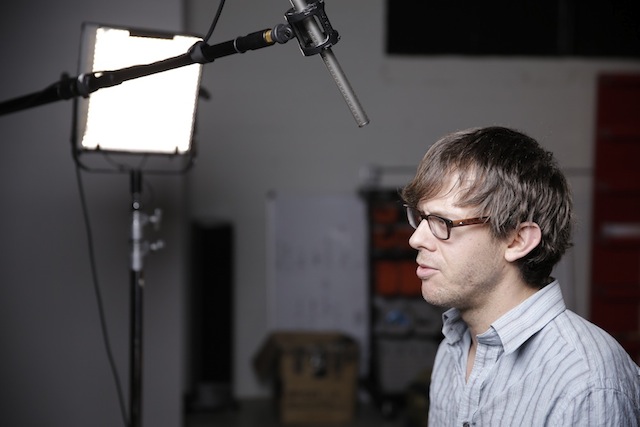 But what about lav mics?!

Yes, for our interviews we almost always will have a lav microphone on the interview subject. The lav mic acts as our primary backup audio source.

The lav microphone we love most is the Countryman B6. [Buy/Rent]

While the B6 may be a bit more costly than most filmmakers are expecting to spend on a lavalier microphone, this one sets apart interviews that look and sound professional vs amateur.

The biggest benefit of the B6 as compared to other lavs is its size. This mic is tiny and it still sounds great! Also, the microphone’s cable is super thin.

This microphone is super discrete and when adhered to your interviewee properly, the audience will never suspect it’s there. With the exception of low budget productions or perhaps reality shows, you will never see a lav microphone appear on a character in a film.

So why don’t you always use the lav mic instead of the shotgun mic?

We use a shotgun mic AND a lav mic simultaneously, as we always want to have at least one backup audio source.

The problem with lav microphones is that they can often fall victim to interviewee error. The interviewee perhaps rubs their neck itching a scratch and accidentally rubs the microphone off their collar or causes a strange noise in the mic. Maybe you’re using a wireless lav kit and random radio waves start causing interference in your signal.

Also, lav mics can get covered by clothing fabric in a way that muffles the mic’s ability to record properly (this is especially common when after the interview starts, you realize that your interviewee is very animated and loves moving around a lot).

That being said, the shotgun microphone is our first choice audio source.

Why don’t you use the camera’s built-in microphone or the Rode VideoMic Pro?

It’s true, two other microphones that filmmakers tend to use in interviews are the camera’s built in microphone and the ever so handy Rode VideoMic Pro.

The built in microphone that comes with most DSLR’s is not what you want to use for interviews for many reasons.

Reason #1: Since it is located on the camera body, it will be very difficult to get the microphone close to the interview subject’s mouth (remember the closer the mic is to your interview subject, the cleaner and more true the audio recording).

Reason #2: Since the internal mic is positioned super close to the controls on your camera, noise of buttons clicking and wheels turning will be captured. Also, the sound of the camera’s internal fans all create a low rumbling noise that reduces your overall audio quality.

A Rode VideoMic Pro is an awesome sound recorder for many scenarios that filmmakers often encounter. If you are shooting alone — run and gun — in the field — and don’t have time to lav someone or set up a formal interview, the VideoMic Pro will give you a a decent quality of sound for your in the field interview. The VideoMic Pro features a supercardioid pickup pattern (which we like for interviews), however the build of the microphone does not reproduce audio with the same sonic quality as something like the NTG-3 Shotgun Microphone.

But how does their SOUND actually COMPARE?

Here’s the interview we recorded with Jeremy to give you some examples of how each of these microphones sound. The camera used in this interview was a full frame Canon 5D Mark 3 with a Canon 85mm f/1.2 Lens. Can you hear the differences?

What about supporting tools?

To hold a shotgun microphone in place during a single person interview, we use a combination of some very handy tools.

First, we place the shotgun microphone into a device called a shock mount.

The one we use most often is the Pearstone DUSM-1 Universal Shock Mount. It’s light, it’s durable and it works for most any type of shotgun microphone.

Next, the shock mount is fastened onto a boompole. The boompole allows you to get the microphone really close the interview subject.

The boompole we often use is a K-Tec Graphite Series. [Buy/Rent]

We love this boom pole because it’s graphite, meaning it’s light and strong. The boom pole also features XLR cables that connect directly to our microphone on one end and connect into our recorder on the other end.

The boom pole that works great for trips where you’ve got to travel light is the Rode Micro Boompole.

When Patrick and Zippy were touring Nepal and had to stay lean on gear, the love affair with the Rode Micro Boompole flourished. This boompole has a tiny footprint and is super lightweight. The downsides are that the pole does not have nearly the reach of a K-Tec and it does not have internal XLR cables.

In order to effectively support a boompole on a c-stand or light stand; you will need a grip head and a boom pole holder.

The benefit of connecting from the end of the boompole to your audio recorder is that you have less loose hanging audio cable to manage.

In order for your c-stand to hold the boom pole, you will also need a boom pole holder and a grip head.

What’s the best way to actually RECORD the sound?

The recorder we use most often in the Tascam DR-40. [Buy/Rent]

The Tascam is awesome because:

Something to remember when you are recording audio into a Tascam DR-40 is that you will have to sync your audio to your image in post.

But Stillmotion, I see you guys using the C-100 for your films. Do you still use a Tascam when recording an interview with a C-100?

If you happen to be one a filmmaker with one of our favorite cameras, the Canon C-100, then you will have a bit of a different audio workflow.

The C-100 has this great handle that features XLR inputs. The benefit of this handle is that it allows you to plug the XLR Cable from your boompole directly into your camera. This means that you won’t have to sync audio to image in post. Also, the C100 provides phantom power for your microphone.

Putting the pieces together…

Here’s a quick recap of our ideal audio setup for a single-person interview:

Yes, factors like location of interview, size of crew, and budget all effect what an audio setup can look like. However, with an understanding of the best use of a standard kit of great tools you give yourself the piece of mind that most important technical production element in your interview does not interfere with the most important reason you are recording your interview in the first place…

To capture a great conversation!