3 insights into fearless living from a big-time filmmaking ceo

Living fearlessly is something that Lydia Hurlbut has learned from a young age.

Growing up on the East Coast, her father, a minister, would spend days crafting each week’s sermon. He’d spend hours just researching, delving into scientific and historical records in order to create something powerful for his congregation.

Lydia remembers coming home from school and seeing the sermon that he’d so carefully crafted, lit on fire. When she asked him why, her father replied that he wanted to avoid the temptation to be repeat the same words.

Instead, he wanted to constantly challenge himself and his work. He never wanted to be complacent.

It was a moment that Lydia took to heart. And an idea that moving forward would impact her approach to life.

A keen businesswoman, mother of two, and wife to Shane Hurlbut ASC, Lydia has spent her life striving for innovation. She’s the CEO of Hurlbut Visuals and it was her idea  to launch Shane’s Inner Circle.

Growing up in a small town on the east coast, she has gone from dreams of saving the world through medicine to running a major multi-media company in Los Angeles. I’m sure folks in our community are familiar with Lydia and Shane’s company Hurlbut Visuals, and in particular Shane’s Inner Circle, which is celebrating its first anniversary—but more on that later.

First, we’ve all hit creative walls or career ruts. We keep moving with the flow of the things because it’s just easier. And soon we find that we’re nowhere near where we thought we’d be professionally, either in terms of skill level or success—or both.

We’re going to share Lydia’s three most revelatory and experiential insights into living fearlessly, from how she remains at the forefront of innovation in her industry, to how she managed to co-found and run a multi-media company as one of the few female leaders in the business.

These are thoughtful and intentional practices that you can begin embracing as soon as you’re through reading this post. Employ them in your higher level thinking and planning for your life and business, as well as your day-to-day actions.

Insight No. 1 – SEE POTENTIAL IN FAILURE

Mistakes are our greatest teachers.

In our chat, Lydia described an “epic fail” that she experienced—it happened when she was 24 and on a journey to become a doctor.

Early on, Lydia felt ignited by a desire to change the world through a career in medicine and so she became a pediatric nurse.

While doing so, Lydia saw holes in the hospital system that she felt prevented progress but, as a nurse, she lacked authority and often felt unheard. Lydia decided that the solution was to become a doctor, but one hurdle stood in her way: she was horrible at standardized tests.

What do standardized tests have to do with becoming a doctor?

The MCAT is a standardized test that is a massive deciding factor in whether someone is accepted into medical school or not. Lydia took the MCAT several times, only marginally improving her score each time, and was denied acceptance to all the medical schools she applied to but one, the Chicago Med (short for Chicago Medical School), which waitlisted her.

Outraged at being put on the waitlist, and feeling that Chicago Med had made “a big mistake,” Lydia jumped on a plane to Chicago and went straight to the hospital to address this egregious error.

Lydia waited, without an appointment, outside the dean’s office door to demand that he reconsider her application. Finally she was let in to make her case. She managed to persuade the dean to accept her into the next year’s class and she returned to California victorious.

But her relief at being accepted quickly turned into hesitation. She remembered that she hated hospitals, and that she didn’t want to be away from Shane. Was she the one who had made the big mistake?

After all the feelings of indignation, dreams of being a doctor, and flying to Chicago to plead her case, Lydia decided that being a doctor was not for her. It had been a failed attempt to change the world.

But she didn’t see it like that. Instead it became a learning experience.

Lydia recognized the power of dedication.

She didn’t see her shortcomings in standardized testing as a reflection of her intellect.

And she didn’t see her change of course as a failure.

She saw past the negative to focus on the positive.

By seeing the potential to learn from failure, Lydia has embraced taking risks, and this has resulted in many positive decisions, the decision to create the Hurlblog and Shane’s Inner Circle being one of them.

The road Lydia took from medicine to movies to business has been a long one.

When she was a nurse she would keep Shane’s schedule, deal with producers to book him on jobs, and make sure that he was paid in a timely manner. She did this for years before he acquired an agent in the mid-’90s.

Even after that transition, they continued to work together as a team to build his career. And this other occured while Lydia was still pursuing her own work, whether it was nursing, pre-medical coursework, forensics, or life coaching.

In 2008, Lydia was working for another entrepreneur. She enjoyed the work and was gaining an incredible experience and learning a lot, but still, something was missing.

Around that same time she had a conversation with her father that forever changed her trajectory, as well as that of her husband, Shane.

“Why are you executing someone else’s dream when you could execute your own?”

She knew he was right. 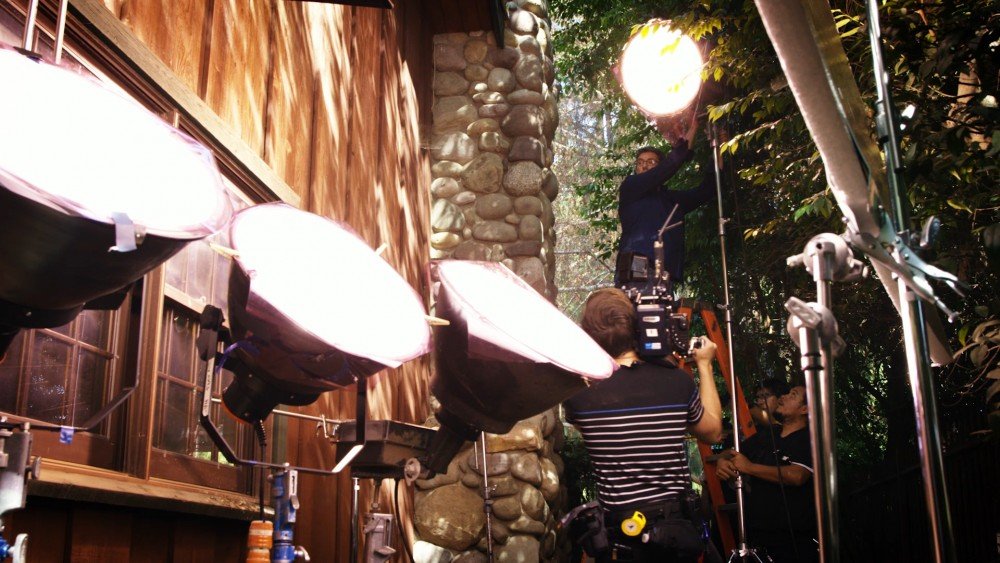 Shane shares the setups and challenges that he’s experiencing on his current sets, including the Gabriele Muccino-directed film Fathers & Daughters and AMC’s Into the Badlands.

That’s now, but at the time Lydia left a secure job to pursue her own dream of creating resources for filmmakers to become better at what they do and more empowered by what they do.

That’s translated to a resource that breaks down everything from film theory to lighting techniques to camera profiles. And the experience comes in many forms, from forums and podcasts to demonstrations and diagrams.

To create this business she knew she would have to “brand” her husband Shane, an esteemed cinematographer in his own right. She spent days planning a presentation, but when she presented it to Shane, he was not immediately sold on the idea.

He was supportive, but he didn’t have a firm grasp of the greater vision she had in mind and how both roles of cinematographer and educator would ultimately coalesce.

Lydia was tasked with the challenges of helping him to see that bigger picture—to see what was possible beyond just Shane as a cinematographer, while simultaneously setting up a functional, profitable business for the first time in her life. 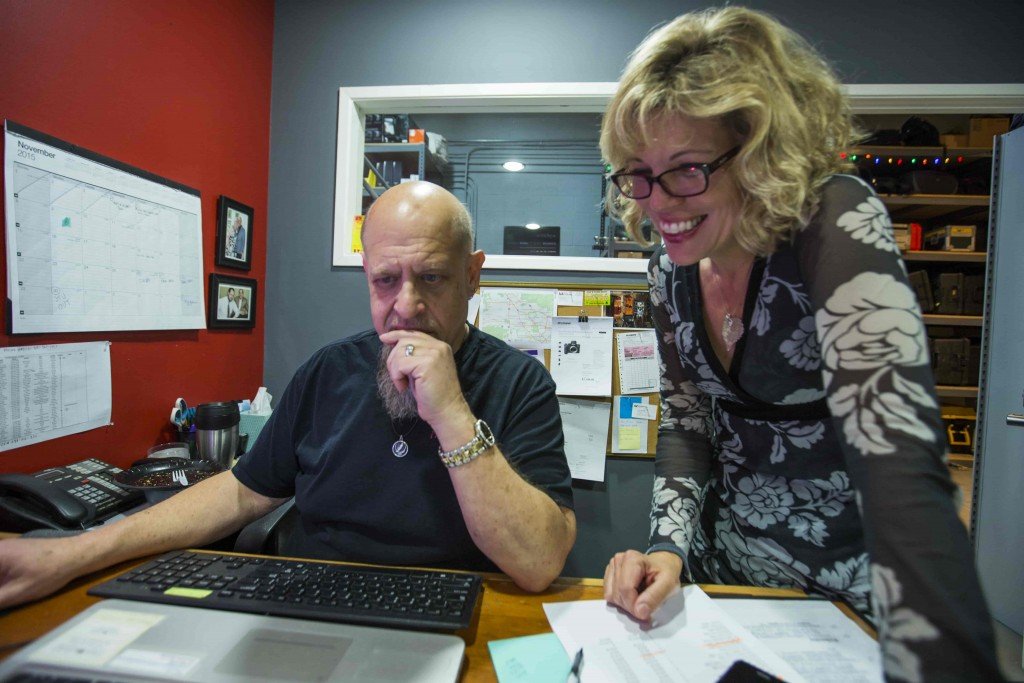 Thinking back to his original reaction to Lydia’s suggestion of branding him, Shane now chuckles “it was her brainchild, her vision, to give back and share.”

Lydia understands that reluctance to change is the separating factor between the lives we live and the lives we want to live.

In an industry where trade secrets are kept close to the chest, educational platforms can be dubious ventures.

It was Lydia’s openness to change her life and her determination for change in the industry that allowed for her successes.

We can change our perspective by acknowledging that we’re all on a journey whose answer we have yet to reach. That means embracing that we still have more to learn.

Insight No. 3 – CREATE THE SPACE FOR INNOVATION

Lydia says a big part of her role at Hurlbut Visuals is to “walk on the edge.” She believes in always learning, growing, and looking at ways to innovate.

With a company to run and a family to care for, it’s not always easy to come up with the new ideas that keep Hurlbut Visuals moving forward.

To remain innovative Lydia focuses on having a strong mind and body, as well as surrounding herself with a strong team. She’s also taken the time to define her core values so that she can ensure she’s focused on, and making decisions that, deliver on those values.

Early on, Lydia took the time to establish what she calls her “core values” (authenticity, family, community, and sharing, among others)—and she sticks to them. They’re what guide her decision-making process and give her focus.

Referring back to her core values ensures her decisions are sound and aligned with a bigger picture.

When she is feeling exhausted and her resources are depleted, Lydia can count on these core values to guide her path forward. This idea of core values is similar to what we in the Muse word call Keywords. And it can be a critical part in defining your style and path to develop your own keywords. Check out this post for help on developing the keywords for your business.

Lydia also takes the time to preserve her mind and body. Regular meditation, a healthy diet, and exercise regime help her to stay mentally fearless and resilient.

It’s so difficult to develop killer concepts or approach ideas from a fresh perspective if you’re mentally or physically depleted, tired, or rundown.

Lydia takes the time to take care of herself.

And beyond both of these, Lydia has established a solid team around her who are both skilled and supportive.

This strong team ensures that the day-to-day minutia of business is ticking away, allowing Lydia to focus on the big picture of her business.

In working to establish this strong team, Lydia allows the strengths of the individuals to shine. She knows that they’re good at what they do, so she gets out of their way and allows them to do it.

In constructing these support structures, Lydia is able to give herself space to innovate.

And one of her biggest innovations is just about to reach its first anniversary. Shane’s Inner Circle is the innovative filmmaking education powerhouse that it is today in large part because of Lydia’s devotion to living fearlessly.

Shane’s Inner Circle is a member-driven global community of filmmakers supporting one another, led by Shane’s expertise. It’s an active community that shares their own perspectives, work, and links to resources with one another—Shane chiefly among them.

And the message from those who are a part of Shane’s Inner Circle is clear: it’s a powerful resource that’s making a difference.

Lydia, Shane and the team have created a story to share what Shane’s Inner Circle is about, why it’s so important to them on a personal level, as well as how they create. Head on over to their site and check it out.

And what’s possible when you collaborate, fearlessly.

The foundation of Shane’s Inner Circle is more than just Shane, it’s a team of people who are visionary, willing to take risks, and strive for excellence through innovation.