How To Fake An Olympics

Whether Mr. Hitchcock is really a kind-hearted family man or just an old pervert, we may never know.

But this simple demonstration of the Kuleshov effect does a great job of illustrating something we do know: what people actually see on screen and what they think they see can be two very different things, and it’s the ability play with the latter that will really allow you to work some magic as a filmmaker.

Now, if you know anything about Stillmotion, you know that we don’t often aim to “work magic,” but rather to document magic as it naturally unfolds, without having to fake anything.

We’ve trained countless hours to avoid using intervention as a means to tell great stories — instead, we get in front of things as they are happening. This is a beautiful thing when you’re telling a real story — but what happens when you are trying to tell a story that you can’t physically access?

Sometimes you just *have* to fake it.

So that’s exactly what we did in this piece that we filmed for AT&T during the 2012 Summer Olympics.

But we definitely weren’t.

The spot was for the AT&T series called “My Journey,” and we were basically asked to make something that would capture the three minutes before an Olympic athlete approaches the starting line, climbs onto the diving block, steps onto the court, etc. Essentially, we had to illustrate the enormous amount of pressure and anticipation that goes into those three powerful minutes that four years of training have led up to.

We had to shoot this spot in various locations around the United States, roughly 1-2 months before the athletes even left for the London Olympics.

While this was a tremendous challenge, it was also a huge opportunity. Shooting for AT&T and the Olympics was incredibly exciting, not to mention that we’d have access to half a dozen world class athletes for about a day each.

As we read over the list of athletes that would be featured in the spot, we started to feel the pressure ourselves:

So how’d we make a fake Olympics?

In a sea of little details that made this shoot come together, there were a few especially crucial factors that we want to share with you, so that you’ll be prepared when you need to fake your own Olympics someday.

Here’s what really made this shoot happen for us:

In every frame of this video, one or more of those factors was absolutely essential to its success. It didn’t matter how we assembled a shot to make it look real — so long as it looked real to the viewer within the confines of the screen.

On your marks… get set design… 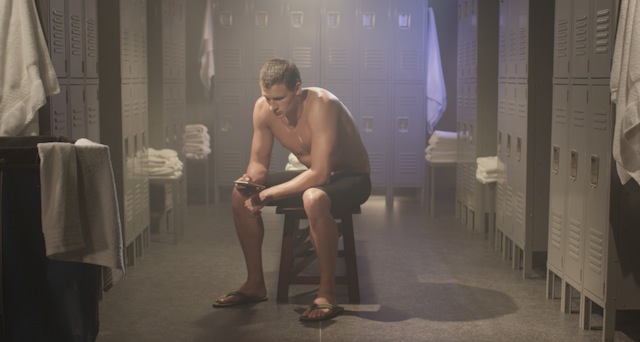 We wanted to show Ryan Lochte preparing in the locker room before heading out to the pool. Seems simple enough… all we would have to do was find a college or high school locker room and do the shoot?

Eh… well… we couldn’t find one that looked right.

Real locker rooms are often way too confined and dark for anything like what we were trying to do, so instead we decided to make our own. In a hotel ballroom.

Our director, Shawn Robbins, had a vision. In order to to turn a ballroom into a locker room, we would need all of the right equipment. He had rows of lockers shipped in, benches, towels, we even had to build our own “locker room” floor to cover up the ballroom floor.

But it’s the small details that are going to make all the difference when trying to make your fake setup seem real. 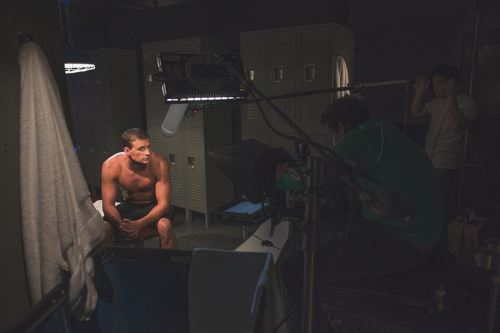 For this scene we piled towels in between the lockers, wheeled a laundry cart into the corner, and kept gymnasium lights hanging just above the lockers so they could occasionally enter the frame.

These little things make all the difference — you don’t necessarily notice they’re in the shot when you watch the video, but you probably would notice if they weren’t in the shot. The viewer won’t be sold on the scenery if the elements that help them mentally establish the context are missing.

The same was true for our shoot with Misty May and Kerri Walsh on the beach in Santa Monica. All we really had was sand and water — no volleyball nets, no fans, and no walls.

So to make our fake beach volleyball court we got two big, square wooden frame structures that we covered with the “London” banner, and these would be our walls surrounding the court.

We had people stand on ladders and bang on the banner and flags from behind to simulate wind movement — without that one crucial little detail, this scene would not look real. 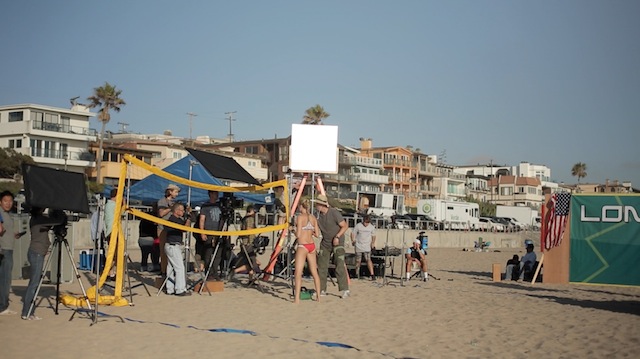 We also utilized camera angles. We got some very crucial wide shots with as much of the beach and set as possible in the frame, so when you look at it you don’t question its realness. With a big outdoor thing like a beach volleyball court, the more you see the more you believe:

Let there be (plenty of) light.

Getting the pieces in place was a part of the sell, but an even bigger challenge was getting the lighting just right so that it really felt authentic.

Our gaffer, Dale (from MidWest Grip), drove a 5 ton truck from Ohio all the way to Florida just so he could light this shoot. In event work we usually work with natural light or bring 3 to 5 lights for an interview. At this particular shoot we often brought in a dozen lights for a small scene and over two dozen for some of the larger ones.

When we first got started in the business, we wouldn’t even know what to do with a dozen lights in a single scene.

What really sunk in throughout the shoot was just how little each light did, yet still it made a huge difference.

In other words, each light would be responsible for so little — perhaps just adding a little touch of color to one pile of towels — but that little touch added so much depth. 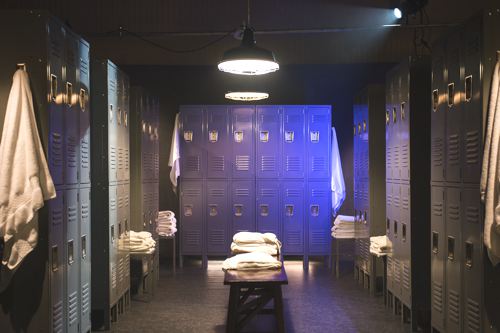 And in some of these scenes, the lights were the whole sell.

Look again at the shot of Allyson Felix riding on the bus (0:33) — you don’t actually see anything around her, the shot is very close-up and shadowy.

The way the light flickers simulates what we know to be passing streetlights…but really that light comes from two dudes with beards moving shiny boards around above Felix to bounce the light off of her.

We bobbed the camera back and forth ever so slightly to simulate that bumpy bus ride movement, added a pair of headphones to the talent, and a very believable bus ride scene was born.

Once again, we absolutely could not have pulled this scene off if we weren’t thinking about context.

Nothing about this scene is real, but everything you see — the flashes of light, Felix’s sitting position, the headphones on her head — all of it is there to help you establish the context of the bus ride, and so it becomes real.

Top it off with a little fog…

In Ryan Lochte’s locker room scene, for example, we were having some issues with small gaps in between lockers or just random little things in the background that made it look less real. We brought in a Fog Hog, and presto— the gaps were filled in, and the fog added just the right amount of drama.

We used fog again in our shot of Alex Morgan walking out to the field, with some of her teammates behind her. The fog helped to disguise the faces of the extras we had playing her teammates, and added a dramatic touch to the shot.

In the shot you see below, we used fog for Ryan Lochte’s shadowy exit out of the locker room.

The fog really helped to fill in some of the gaps we were getting with this particular shot — we had all that bright light coming in from the doorway, and Lochte’s shadowy figure going toward it, with nothing in between.

The fog added just the right amount of depth, and helped sell the image of Lochte walking out of a locker room rather than through a doorway in a rented airplane hanger. 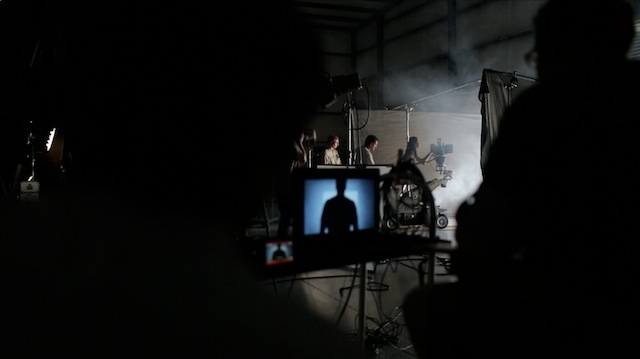 Basically, with a simulated environment like this it’s great to use something like fog to cover up all the nooks and crannies and make your scene look real.

Fake it ’til you make it.

If you’re gonna fake it all the way, you really shouldn’t limit yourself.

Think out of the box on some of this stuff and remember that Alfred Hitchcock had a point with the whole bikini thing. Once your viewer establishes context, you can really get away with a lot and it can save you a lot of time in the end if you utilize some trickery within that context.

For example, the shots you see of Ryan Lochte swimming aren’t actually him.

We used his roommate (also a swimmer) as a body double for these shots because our time with Ryan was limited. Once the viewer sees Ryan and establishes that it’s him, it doesn’t really matter if it’s actually him swimming in the pool — no one is going to question it.

No one is going to question Alex Morgan’s soccer ball kick either.

We shot her running at the ball and bringing her leg back, and that was enough. From here, we could record the shot of a foot (anyone’s foot will do) kicking the ball, and the ball going into the net (why not just throw it in?). Without question, you have a quick series of shots that add up to Alex Morgan making a goal.

But we had shot that soccer ball scene a few times before we realized we didn’t have to actually kick the ball in the goal, we just needed the shot of the ball flying into the net. Throwing it in would be easier, and more controlled.

As a whole, Stillmotion really is committed to capturing true emotion, and authentic moments as they naturally occur — this is how we tell the best stories.

Being that natural footage is our forte, this particular shoot was a really fun challenge for us. With a shoot like this, we continually had to remind ourselves that nothing actually had to be real, as long as the scene would feel real to the viewer in the end. With this in mind, we were able to think outside of the box on multiple occasions, and get creative with the shoot to get the results we wanted.

So… does Alfred Hitchcock like watching happy babies interact with their mothers, or hot babes in bikinis?

It’s entirely up to you and your vision for the piece — and as we found out, there are a ton of ways to create that vision.

Our vision for this shoot came to life through creative set design, lighting and fog, using tight or wide angles to sell a shot, and some good old contextual trickery.

Have you ever faked an environment in one of your films?