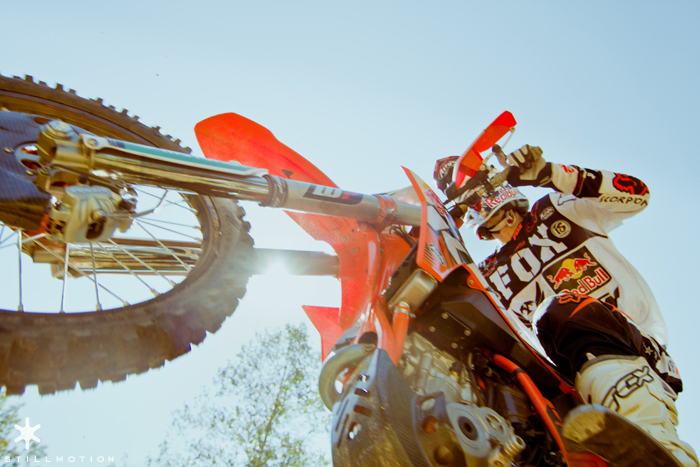 in my previous post, i said “stay tuned for more”. well, this is part II, where i get to share all the craziness we experienced on race day!

extreme enduro is the outdoor version of endurocross. according to wikipedia, eric peronnard, plays a huge role in the success of US endurocross and supercross.

first off, let me just say what a pleasure it was to work and hang out with eric – a well-traveled, soft-spoken guy with a thirst for (bone-breaking) adventure.

but i have to say that EVERYONE we ran into was REALLY nice. as i wrote in my email to eric this morning, while the riders look all rough and tough, they’re really sweet when you get the chance to just chill with them.

i had a ton of creative freedom for the shoot, which meant i could focus on the stuff that made my heart pound the most. it was also great getting to work with jeff from throttle entertainment, who LIVES for this stuff.

and i gotta say, i’m hooked too. 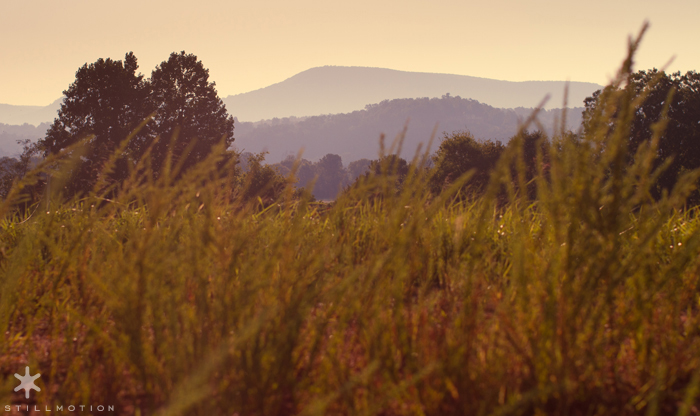 the misty (or dusty) morning hills of sequatchie, TN. 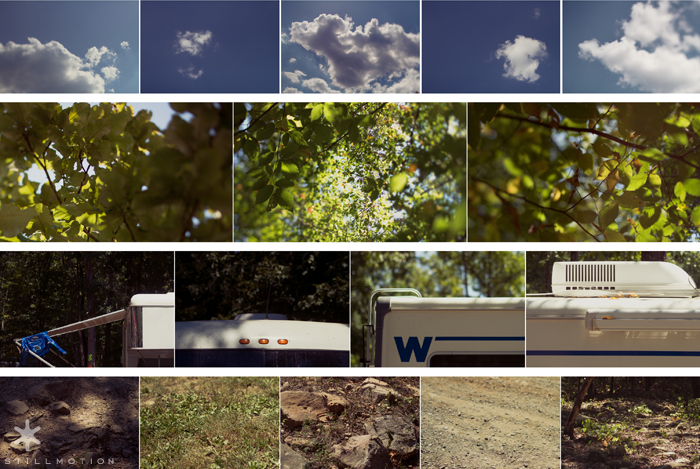 one of the first things you’d notice is the community at the race. BBQing, RVing, cheering. this is my interpretation of how the more “civilized” areas felt. you had the different terrain under countless winnebagos, a ceiling of lush foliage keeping the “camp” cool, and the sunny skies above with the promise of a really great day. 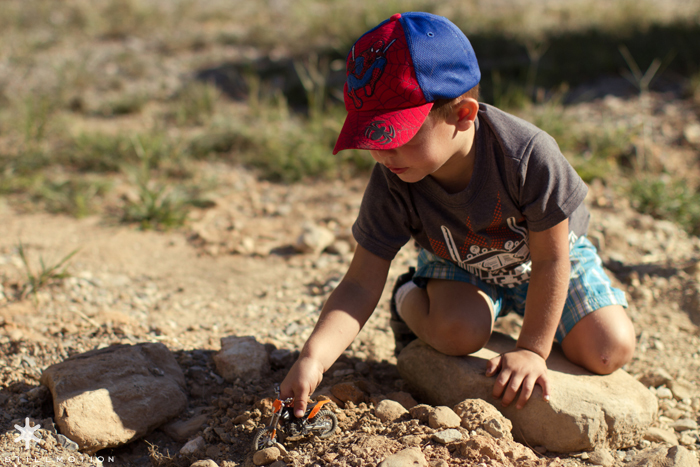 one of the younger enthusiasts taking his first steps towards off-roading. every so often, a 4 year old would zoom by on a dirt bike the size of a small dog… it seems like these kids start riding before they can even eat solid food. 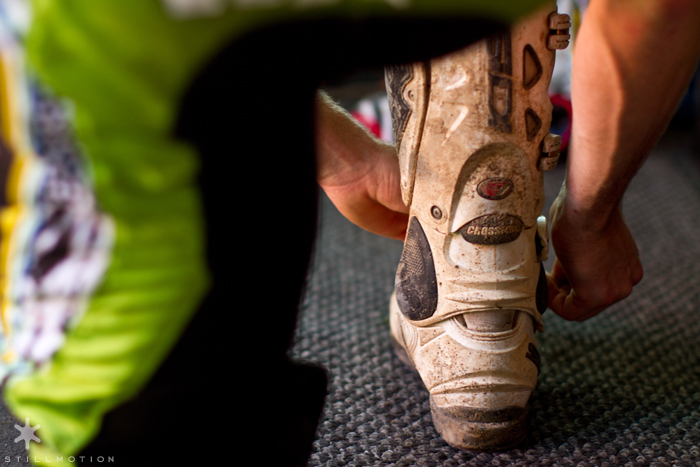 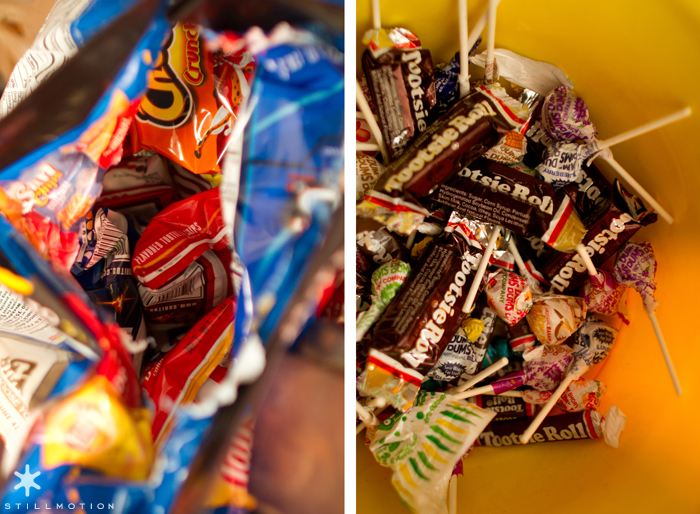 breakfast of champions. these sat next to a multitude of wrenches as well as autograph-signing sharpies. 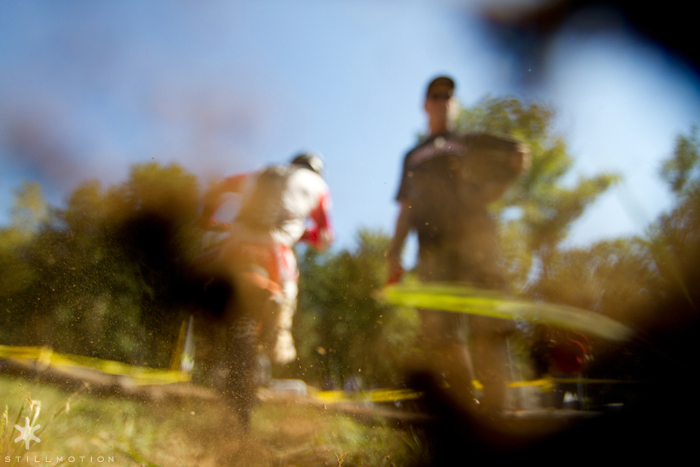 the starting line @ race #1. this is where things started getting “risky” for me and my cameras. 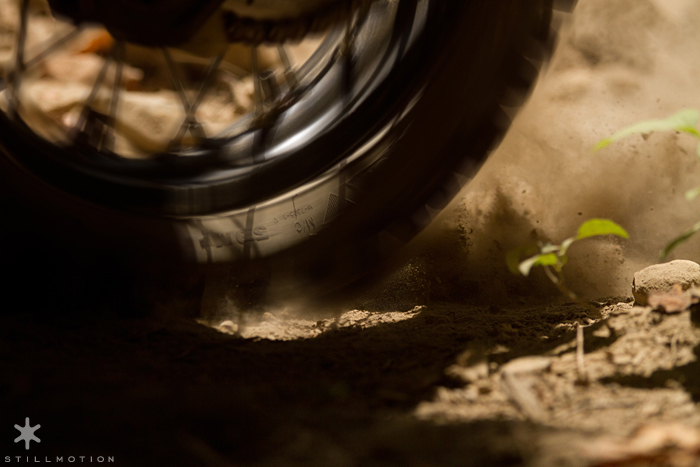 it was so dusty that when i blew my nose at the end of the day, my kleenex was black!!!

shot with the 14mm during taddy błażusiak‘s take-off. he’s about 6 inches from landing on my camera. to get in the right position, i had to grind the camera into the dirt so it would stand on an angle. i’m probably gonna need to get it detailed… 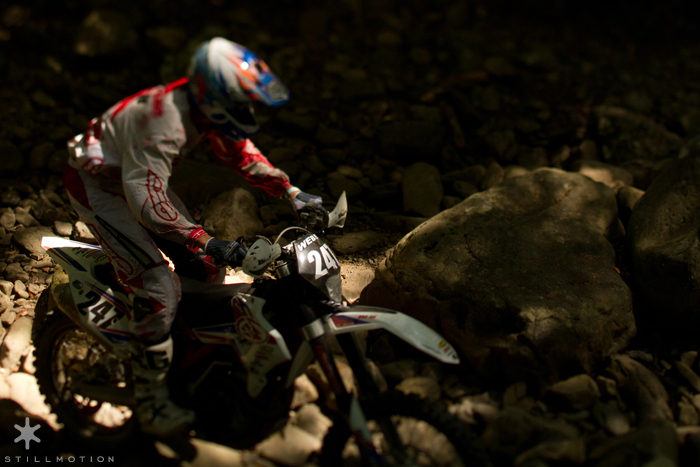 and then the tilt-shift came out. tilted plane of (manual) focus at high speeds while trying not to get crashed into. 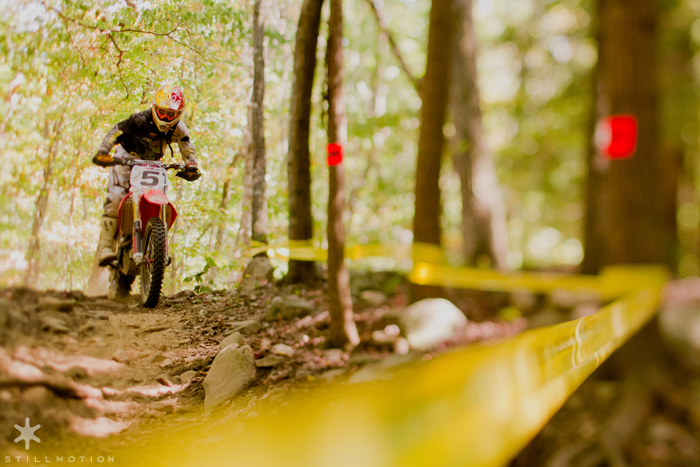 shooting from behind the yellow tape. of course, if he skidded around the bend, i’d be enduro-kill. 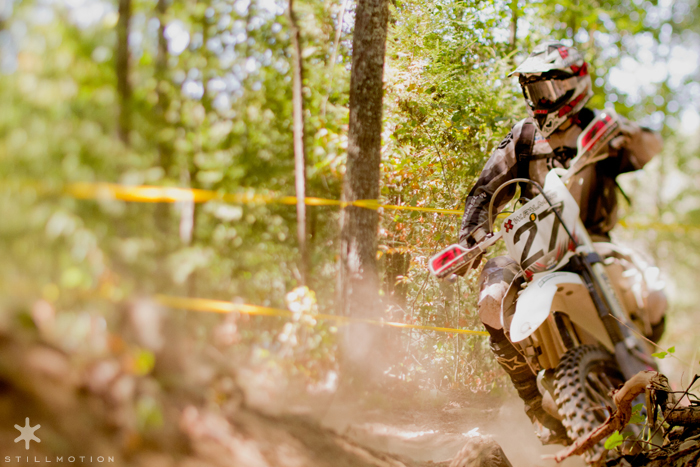 remember how i mentioned wally’s bum leg in my previous post? well, here he is riding like nothing ever happened. 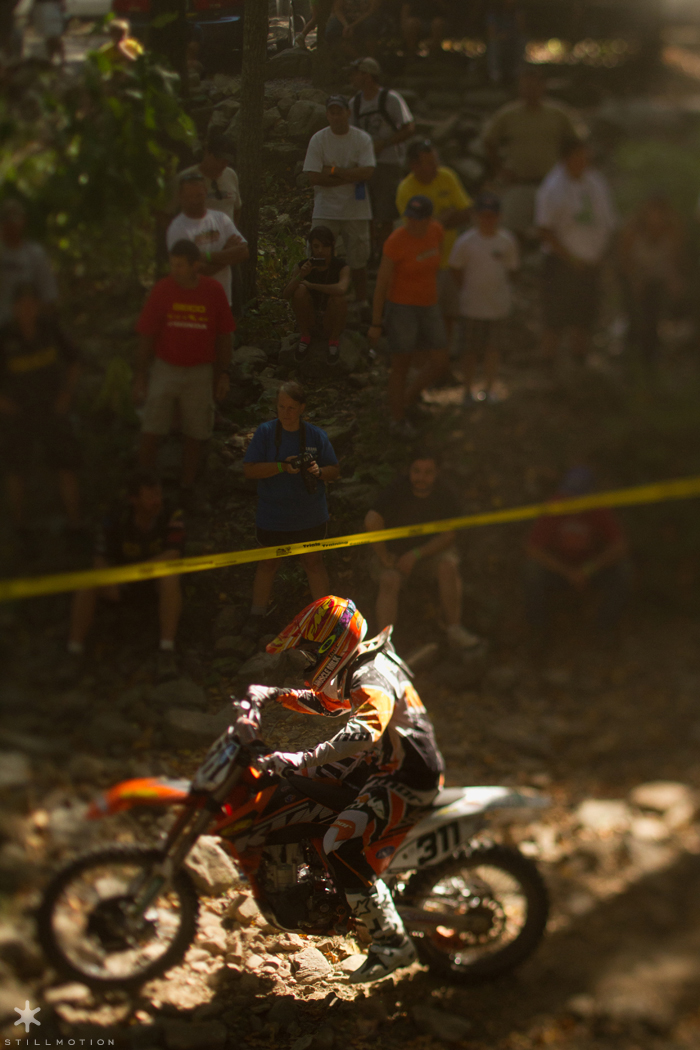 another “tasty” pocket of light. mmmm. 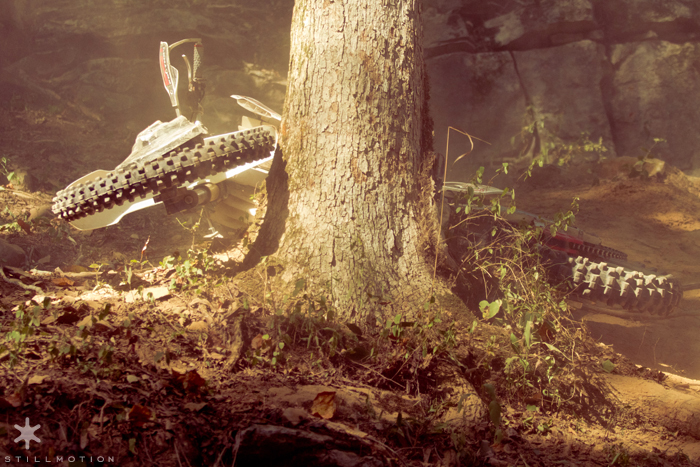 back to wally again. but this time it’s not so good. his bike wrapped around a tree, his leg a bit more bent out of shape, but he got back up and still finished top 10. 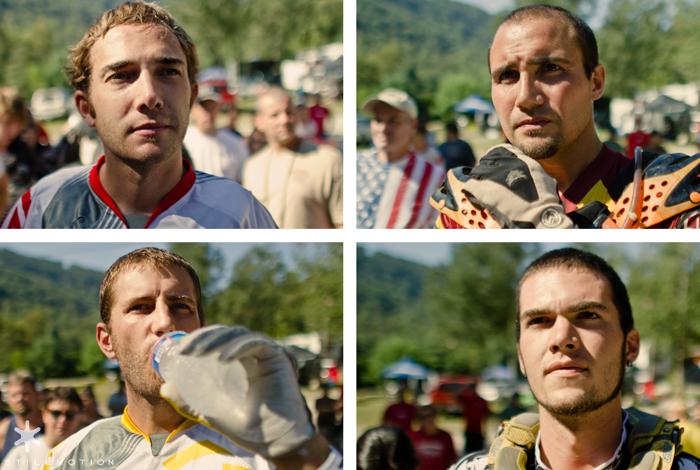 let’s go back to the morning for a sec, shall we? notice the determination, the focus, the hunger to conquer…

and now let’s take a look 6 hours later. sweatier, dirtier, and in a bit more pain. 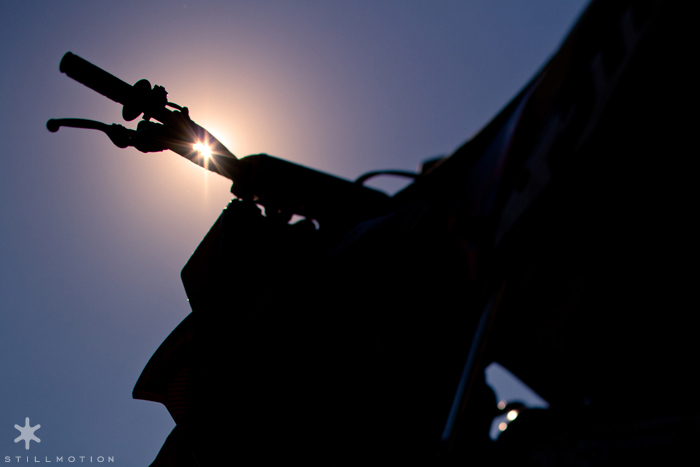 the winner’s bike, hoisted up in the name of victory. 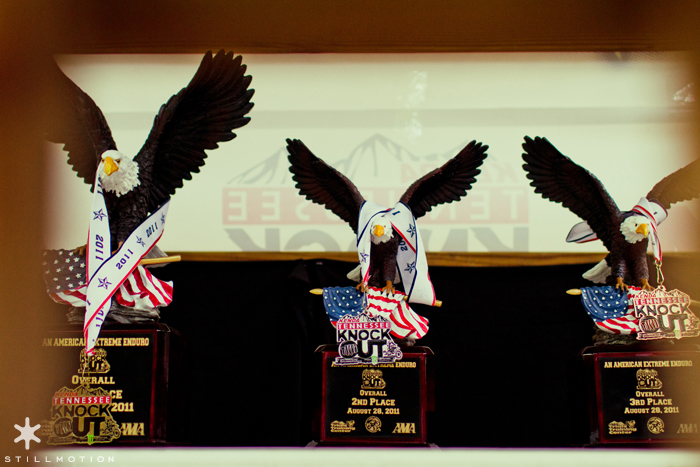 backstage (as backstage as you get in the middle of the woods). 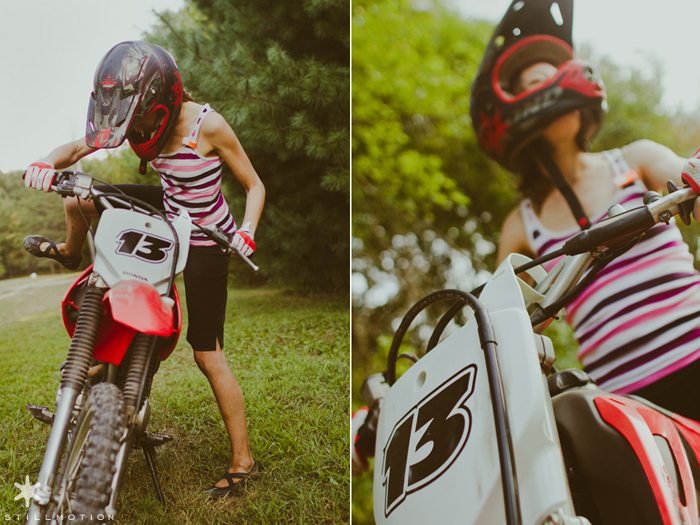 and then there’s me! first time riding a dirt bike! (thanks ray for snapping these!) now i just have to convince P that he should let me get a cute little motorcycle.  🙂