This is our friend, Marshall Jones. He’s a poet, performer, author, songwriter, and all-around badass human being. He’s also a walking example of how a strong human connection with someone is far more beneficial than any typical business connection could ever be.

Marshall wrote the beautiful words you hear in our Stillmotion reel. The narration is powerful, effective, and it’s 100% us.

We spent only a few short days with Marshall before he wrote this, but he managed to compose something that perfectly translates who we are as a company, and who we are as people.

See for yourself — here’s the Stillmotion reel:

Marshall did such an amazing job with this, but it wasn’t because we wrote him a check. We did a favor for him, and he did one for us in return.

In our experience, it can be so beneficial to go the extra mile like this to make unique connections. There is no business as usual at Stillmotion, and we’ve found that creating a solid network of people doing what they love is the best business model for us as filmmakers.

Doing what you love is no joke.

In this industry you will hear a lot of advice. Often it’s going to be helpful, and occasionally it will be revolutionary.

We really can’t stress enough how important it is to share ideas and experiences with other filmmakers. Stillmotion firmly believes that you get what you give, and we live our lives through sharing and iterating ideas.

That being said, once you actually get good at what you’re doing in this business, you might hear a lot of advice like this:

While Heath Ledger’s Joker is legendary… we’d advise you to ignore that piece of advice.

If you’re really good at making films, it’s probably because you love it.

As you continue to improve and produce more content, you will inevitably encounter some opportunities to go the extra mile and work for free (or almost free). Maybe you won’t even be asked to do it… you’ll just kind of want to.

Our advice would be, if it feels right (deep down), put yourself out there and go for it.

Show up. Hustle. Work your ass off. All for free.

Well, we’ve had some really great things come our way simply from sharing our love of what we do with others. The NFL and CBS came into our lives and changed everything, because they saw a film we’d made entirely for free.

Our amazing Creative Director, Grant Peelle, came to our company by not only volunteering his services for free – but literally paying for his own travel (we didn’t know at the time) to show up and work for free.

And – not surprising – working for free is also how we met Marshall.

We want to share Marshall’s story with you because these are the kinds of things that can make or break your company. If you listen to the Jokers of the world, telling you to limit the amount of work you produce because you’re good at it, you’ll not only miss opportunities — you’ll miss the whole point of doing what you love.

Here’s how the magic went down:

We were hired by BioBeats in February of 2013 to do the Live Your Life Out Loud spot that they would screen at SXSW, and they brought Marshall Jones aboard to write the piece.

Our friend Nadeem at BioBeats showed us some YouTube videos of Marshall performing spoken word poetry, and we instantly recognized what an incredible performer and writer Marshall was.

This performance of “Touchscreen” particularly resonated with us:

We knew right away that we wanted to film him doing what he loves.

When he flew into Portland to shoot the BioBeats piece with us, we used this as an opportunity to shoot some of his personal spoken word pieces as well. Being that he would only be in town for less than 48 hours, this meant it would be a long night. But it was worth the extra time and effort.

In exchange for the extra work we’d be doing for him, he wrote us a narration for our reel.

This trade of artistic services was technically costing us more dollars than it did him, but what the hell did it matter? We were trading our talents to help each other improve upon those very talents we were exchanging.

But we got so much more out of the experience than just trading of services.

Marshall was here for less than 2 days, and in that short time we gained such a better understanding of how we want to connect with the people we work with here at Stillmotion. And we can honestly say we became better people for having met him.

When Marshall speaks to you, he really bears his soul.

He doesn’t hide who he is underneath the layer of awkward small talk our society has designed for meeting new acquaintances. We went to dinner with him in the short time that he was here, and we shared things about ourselves that you normally wouldn’t share with someone you only just met.

He has that kind of infectious energy about him. Because he transferred that energy to us, we completely opened up and gave him the opportunity to understand who we really were in a very short amount of time.

After Marshall went back home, he gave us a call.

He wanted to re-write the piece he’d originally written for our demo. It wasn’t a perfect vocal illustration of who we are. What’s so amazing is that he really recognized that, after spending only 48 hours with us.

What’s more amazing is that he took the initiative to rework what he’d already written for us, because he knew we’d do the same for him.

This is what it truly means to invest in your work and the people you’re creating art for. He made the conscious decision to go the extra mile for us, because we made a true connection with him.

This is what we try to do on a daily basis with the people we meet.

Obviously Marshall is an exceptionally open individual, and he makes it easy for everyone. It’s not always going to be easy to get people to open up to you, but we found that Marshall’s openness is what made it so easy for us to bear our souls to him.

This means that whenever possible, you need to break down those walls of awkward and polite client communication and let them see who you really are.

When you’re trying to tell someone’s story, you need to get to the heart of who they are — otherwise, what are you doing? You’re making something that is good, but it’s not them. You’re essentially making the first draft that Marshall made for us, instead of the final draft.

And the thing that is going to take you from good to the perfect is the commitment and love you have for what you do, and who you’re creating it for. 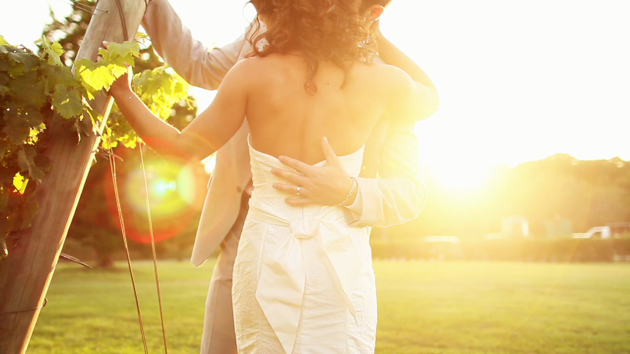 JC and Esther’s wedding highlights film is another great example of the magic.

This is the film that was noticed by the NFL, the film that inspired them to call us, and eventually ask us to film A Game of Honor — which completely changed the game for us. Major stuff!

But remember, we made JC and Esther’s wedding highlights film entirely for free.

We were at their wedding for a different reason entirely — the photographers, Justin and Mary, hired us to do a promotion video for their photography company.

We had just gotten our hands on two pre-production Canon 7D cameras, and we saw an opportunity to do something cool. We figured that we’d make a highlights film since we were already there at the wedding. And now JC and Esther would get a wedding film for free, just because 🙂

It was an opportunity to be as creative as we wanted to be. We weren’t working for anyone but ourselves on this highlights film, the possibilities were endless!

And they’ve been endless ever since.

Our documentary A Game of Honor went on to win three Emmys, but we never would have even made it if we hadn’t been contacted by the NFL. And the NFL wouldn’t have called us in the first place if it weren’t for JC and Esther’s film.

We put energy into JC and Esther’s highlights film. A lot of energy actually — it was made with only one shooter!

We did it expecting nothing in return, purely out of our love of storytelling and our excitement over some new cameras. Look where it got us.

Marshall Jones does a beautiful job of illustrating this concept of human networks, love, and connectivity in his 2012 TEDx Talk:

What he’s saying here is that serving someone else, even when it poses no foreseeable benefit to you, is a transfer of love and energy.

By transferring that love and energy to them, you’re creating a network — and you never know where that network will take you.

When you ask this industry for advice on “free” work – you’ll get a lot of strong responses to both sides.

And honestly, there is a time and place to charge premium for services. We certainly do most of the time.

But occasionally there are moments in life that can change everything.

Put yourself out there.

When an opportunity feels right to you…