Do you believe what I believe?

“People don’t buy what you do, they buy why you do it.”

And it’s also what inspired the video below, where Felipé, a toy designer from Mattel, tells the world why he loves what he does.

We were approached by Mattel’s subsidiary, Mega, to create a video series that would make people fall in love with the philosophy of the company. It wasn’t about making a typical commercial where the audience feels “sold to.” It was about creating a relationship with parents across the world, where they would feel a kinship with the people who make their kids’ toys.

In this film, Felipé talks about his passion for toy design, but more importantly WHY he loves it. One of his favorite things about being a toy designer is the fact that he can watch his own kids play with the toys he dreamt up on his sketchpad. They have a passion for blocks as a family and it’s something they often share memorable moments around.

Notice, we didn’t try to sell a Mattel product. We simply connected you to the “why” of one of their employees.

Mattel is one of the more progressive companies in this regard.

But in an age where people are bombarded with a whopping 5000 ads per day, talking about what you build/make/do simply doesn’t convert. At least not nearly enough. 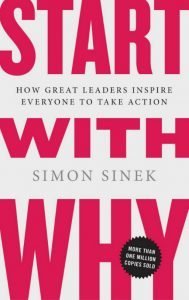 “When we lead with ‘what,’ people can understand vast amounts of complicated information like features and benefits and facts and figures. It just doesn’t drive behavior.”

That’s where the “why” part comes in. When we start our conversations, blog posts, videos, or web communications with “why,” we’re appealing to the decision-making part of the brain. It’s the part of us that says, “I have a good feeling about this,” or “my gut says to go ahead.”

When the gut says go, we go. Behavior is driven by how people feel.

Does this only apply to marketing?

What we’re talking about here is communication strategy, and while that’s certainly applicable in marketing contexts, it’s relevant just about everywhere: in a cold email to an influencer, on an “about us” page, in a client pitch meeting, even when onboarding a new teammate.

Many of us entrepreneurs know what it’s like to work with the wrong client. Trust is shaky, misalignments abound, and as a result, creative control is stripped.

Such situations are often a result of not aligning on values with our clients.

“The goal is to do business with people who believe what you believe.”

The first step is to know what you believe yourself, and having the courage to share it.