Your Camera Is Your Audience

It’s easy to point the camera at the action without really thinking about perspective.

But you can’t just leave it up to your audience to figure out the ideas you’re trying to communicate in your film. The position of the camera is going to effect the way they perceive the story regardless of where you put it, so you might as well put it somewhere that matters.

How do you want the audience to experience the action?

It’s important that you always ask yourself this with any kind of camera work — be it event coverage or a dramatized scene like you see in this tutorial. As Patrick mentions, there are several options when it comes to positioning your camera, and the choice you make will ultimately dictate your audience’s experience.

In the heated argument we see unfolding in this tutorial, camera placement makes a huge difference in how we as the audience form our opinion about which of these two should just suck it up and do the dishes already.

When deciding on camera placement, there are two major things to consider:

1. Camera direction/ POV.
Do you want the audience to view the action from a specific person’s point of view? Do you want them to be totally neutral?

2. Camera height.
Should one subject be positioned more dominantly than the other?

The answers to these very important questions will always vary with the story you’re trying to tell. But don’t let it get too complicated… just ask yourself, whose side do you want the audience to be on?

In this particular example, we’re witnessing an argument that is really anyone’s game. Each of these characters has a point… so depending on the story, we have a choice to make — his point of view or hers?

By placing the camera on his side and pointing it toward her, we feel like we’re on the couch, and she’s just approached us. This sets us up for the conversation that transpires differently than if we were looking at it from her side. 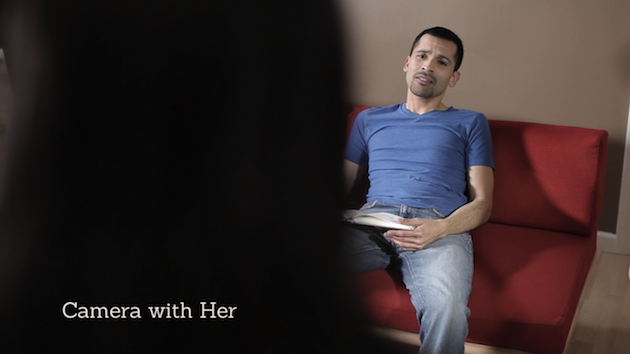 Now we can also move the camera over to her side, with the camera peeking around her shoulder. Look at this guy just sitting on the couch… why doesn’t he just get up off his butt? Come on dude! 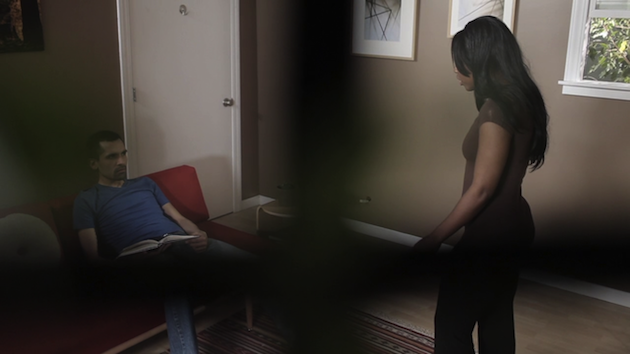 Maybe it’s not about choosing sides. This point of view — from the outside looking in — presents an entirely different way to view this story. Now we’re looking at both of them from (literally) the outside, and we’re in a much more objective position, and the window pane in the frame suggests that maybe we’re watching something we aren’t necessarily supposed to, a private argument.

Our minds are in a different place with each of these different camera positions, and it absolutely makes a huge difference in relation to how we form our opinions as the story goes on and the plot thickens.

Do you want one character to project more dominance than the other?

Do you want dominance to remain neutral? 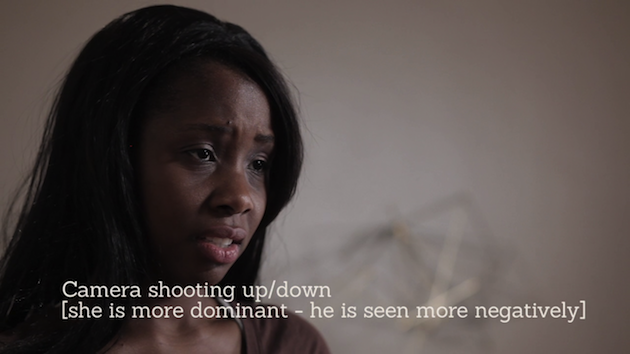 Holding the camera lower and pointing it up at the subject is going to make them look higher, mightier, and more powerful. Whether or not we want to be on this woman’s side in the argument, the way the camera is positioned here establishes that she is the more dominant character, and it’s going to effect how we view the outcome of the argument. 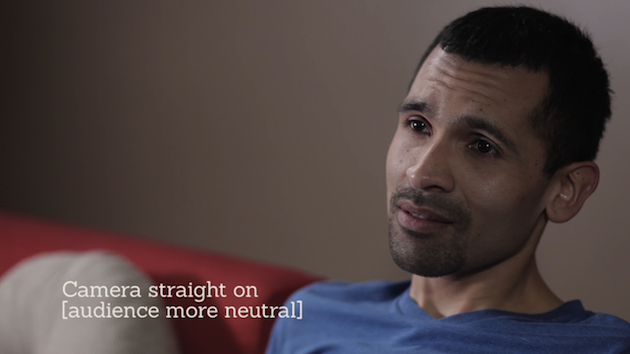 Keeping it neutral achieves something different. As the audience we’re left to do more work now, we’re not being told who is dominant and we have to come to our own conclusions about this argument and the characters in it.

Like we often say: filmmaking is all about choices. Constantly, all the time… you must choose!

Where to place your camera is just one of many. Once you know what the story is that you’re trying to tell, who the characters are, and the ideas you want to get across… this won’t even be the most difficult decision you’ll have to make.

This is just another step of the process that you must be conscious of when telling a story, and it will help you make many of the choices that follow: your lighting and composition choices, for example, will be influenced by where the camera is placed. In that sense, this is one decision that’s going to help you out in making the decisions that follow… and that’s a very beautiful thing.

Whose side are you on?

Did the camera placement influence your opinion of who should do the dishes?