No one would have guessed that the revamped anniversary credits celebrating 40 years of Saturday Night Live were entirely inspired by one single photo of Pablo Picasso. 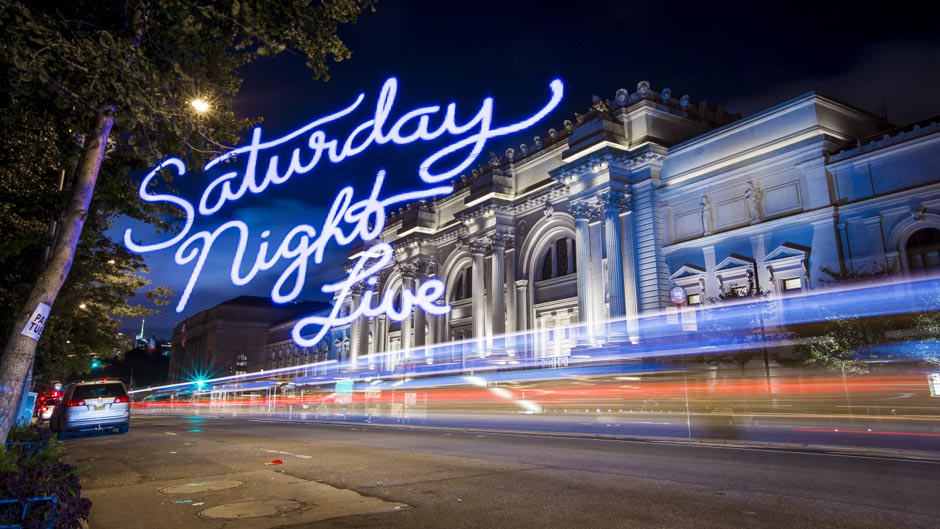 To honor 40 years of being on the air, show producers were looking to revamp the opening credits of the program to hearken back to the dawn of the show, when it began in the mid-1970s.

This presented an interesting challenge to Alex Buono, the show’s Director of Photography who may simultaneously have the most challenging and fun job in the industry.

To come up with a concept, he looked for inspiration. He, in Los Angeles, and his collaborator, in New York City, sent different images back and forth to spark an idea, a direction, to create a visual reference. Images went flying back and forth as email attachments until they stopped on this one of Picasso. 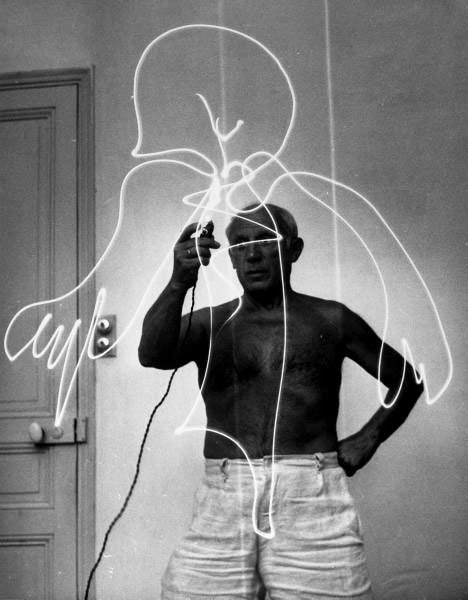 In it, Picasso stands with light wand in hand, using it to paint a cubist figure, all captured through long exposure.

Alex’s colleague sent him the image excitedly—this is it, this is what we want, he said. At first, neither of them were able to articulate what it was about the image that would inspire the entire sequence. But then it became clear.

And that understanding sparked an idea.

They then decided to create the opening credits within certain parameters.

There would be no modern special effects like CGI. They wouldn’t do “some crazy thing that couldn’t have been done back then,” says Alex. They would create opening credits that only utilized the technology and in-camera effects available in 1975.

Creativity is borne of constraint.

It’s a notion we at Stillmotion constantly put to use, and it works because it’s true. And it’s affirming when other creatives put the concept to use and find success as well.

Those parameters give focus, and from focus, comes clarity.

Alex’s parameters and constraints were inspired by the artist Picasso, but in talking with Alex, he mentioned seven key areas to seek out inspiration for creativity. Seven places to look to inspire an idea to create those parameters and provide focus.

He does a deep dive of this concept as part of his Visual Storytelling 2 tour, an all-day, often hands-on event zig-zagging across the country.

I attended the Portland event, and while he broke down everything from combatting mixed color temperatures to how he created nostalgic set experiences for interviewees, I came away with a few insights of my own, inspired by what I was seeing.

Here are those insights…

[Tweet “Here’s a breakdown of 5 crazy-helpful insights taken away from a day with SNL DP Alex Buono:”]

1. Seek inspiration beyond the scope of other films and filmmakers

Rather, he sought inspiration from an image of Picasso, of an artist. And he looked to an image that itself was a piece of art.

He saw an artist expressing himself through an in-camera effect that was most popular during a distinctly earlier period of time. And he would do the same.

Art isn’t the only realm that Alex recommends pursuing for inspiration. On tour, he names seven other realms total that he regular seeks out, and here’s an example of another, literature.

Alex uses the example of The Uncanny by Sigmund Freud that inspired Stanley Kubrick’s look in The Shining. In the essay, Freud expounds on the psychological idea of unease based on a mixture of the familiar and unfamiliar. Specifically, Freud mentions the repetition of the same items causing an uncanny feeling. Kubrick used twins to express this repetition, but beyond that used the repetition of symmetry in much of his composition to express this idea. 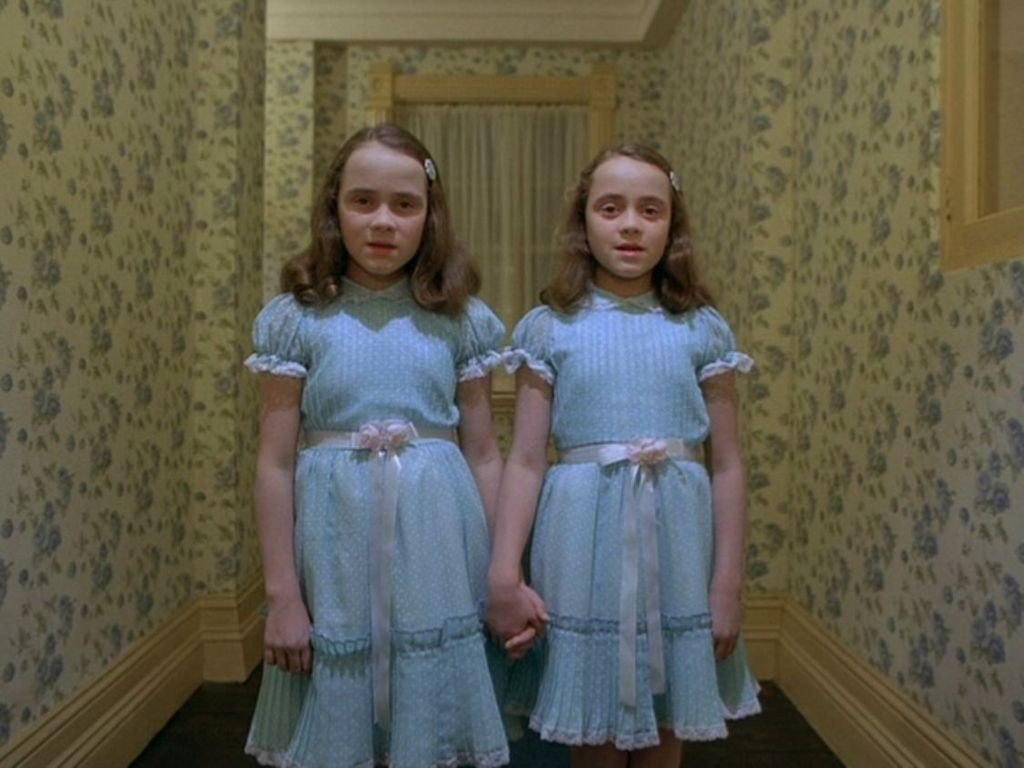 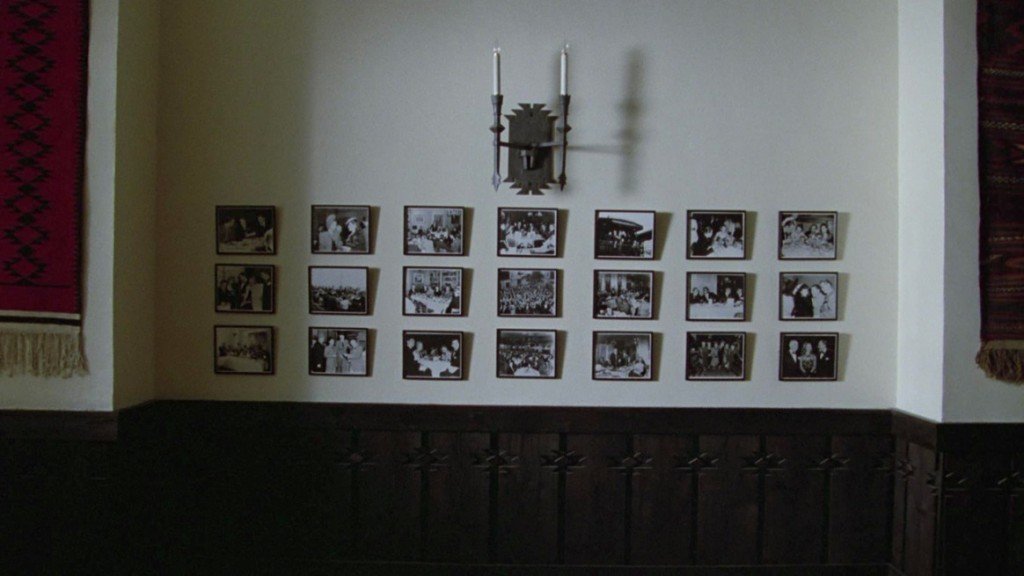 Take Away: As a creative, don’t just look to the greats within your genre–look well outside of that genre. Know that the incredible filmmakers you respect were inspired by more than just other filmmakers. Inspiration comes from everywhere, film is just a medium to channel it.

2. You can make your editor happy in just 12 frames.

Scripts come out on Thursday, which is when he first learns what he has to deliver the next day, Friday, when they shoot.

In just one episode, Alex may have to master the look of YA action films and TV mockumentaries, and a host of others. The skits are all wildly different and there are a lot of them. You’ve seen SNL (it’s been on for 40 years, you may have caught it).

To achieve a look, he first picks out a point of reference, or a frame that demonstrates the look he’s going for. Then he examines that frame by breaking down the six components of visual style (something he goes into at great depth). Among these six components, including lens choice and quality of light, is an often overlooked one: editorial rhythm.

Understanding the overall visual look, including the editorial beat of the story, can save you a lot of time on set or out in the field.

And Alex has learned this from experience.

He mentioned that countless times he has been out in the field, spending so much time to get the perfect 30-frame steadicam shot from end to end. Or he’d spend a lot of time to capture some amazing swooping crane shot only to have the editor use just 12 frames, either the first 12 frames, or the last 12 frames.

“If you take the time to evaluate what you’re shooting, while you’re shooting it, you can know that if it’s a fast-cutting Paul Greengrass-style sequence, the editor isn’t going to go to a 30-second steadicam shot,” says Alex.

3 Get it Right the First Time

A few SNL seasons ago, Alex had to shoot a Valentine’s Day skit in a pharmacy. It was hell on Earth as far as fluorescent lighting was concerned. Rows and rows of lights that cast an unflattering pigment on the talent’s skin.

But he was wrong.

Even the amazingly talented colorist at SNL wasn’t able to correct for the magentas and greens. It was too late to reshoot and it went to air.

He should have addressed the lighting issue when he had an opportunity. And the next time he came up against a similar lighting obstacle he was prepared and came armed with solutions, and he shares those solutions if you see him in person, but he never got to go back and save that Valentine’s Day skit.

4 There isn’t a whole lot of crossover with different film industries—but there should be.

Over the years, Alex has attended a number of workshops to become a better cinematographer, filmmaker, and storyteller. He’s always listening and learning and looking for strong ideas.

Even when he’s teaching workshops.

Alex mentions friends who he’s met through workshops that share their own solutions for the different problems that arise in the field, or the different innovations people come up with to tell stronger stories.

He’s not afraid to push his skills in different genre directions, even if they seem unorthodox for his current medium of television and documentaries.

Case-in-point, Alex is a big fan of some of the techniques created and honed by wedding filmmakers.

Techniques that he introduces to his TV friends to bewilderment—”Where did you come up with that?” they ask him.

For example, Alex uses what he refers to as free lensing, or what a lot of wedding filmmakers call lens whacking. He used the technique to shoot the portrait shots of SNL’s opening credits, and the Hollywood folks on set thought that what he was doing with his lens was insane.

And he also noticed a lot of wedding filmmakers using filter masks to create heart effects in their love stories. Alex decided to do something similar for the SNL title sequence.

It seems commonplace for wedding and documentary filmmakers to appreciate the work of the super cinematic images they see on screen, but there’s no reason that that appreciation has to be one directional.

Take Away: We should always be listening and learning; innovating and improving upon. Innovation is innovation, even if it doesn’t come from the genre that you’re working within.

When Alex first began leading a crew his communication was short and sweet. For instance, “Um, let’s set that light up over there for a so-and-so look, you know what I mean?”

Short and sweet, but not very direct.

It was quite a while on set with his crew, who were wading through frustration, until a member of his team approached him and said, “You know, every time you say ‘You know what I mean?’—no one knows what you mean.”

It was a turning point for Alex.

He was overestimating his own communication skills and in so doing was leaving his crew in the dark.

To remedy the situation he began drawing overhead diagrams of the exact lighting set-ups that he wanted to see.

And it had a number of unintended advantages. Not only did his crew understand exactly what he wanted, but it allowed him to work through and troubleshoot different lighting scenarios before arriving on set.

Because so much of SNL has to be shot so quickly, the overhead diagrams allow him to move from location to location more quickly. Since his crew has a map, then can set up the lights well before he arrives, minimizing the time spent at each location.

The effect is similar for filmmakers with a much smaller crew or who work solo. Going in with a plan always saves time.

Alex creates his overhead diagrams in Adobe Illustrator, and breaks down how exactly he likes to set everything up.

We’ve created this overhead diagram that you can take, print out, and use for your own set-ups. It’s very straight-forward with a legend at the top.

Take Away: Clear communication with your crew is vital. Always find way to be better at it, it will only help your crew, your project, and your story. It starts with you.

These were my key insights into the wealth of information on visual style theory and technical skills provided by Alex Buono. Yours may be even greater.

These insights are just the tip of the iceberg.

Alex greatly, greatly expands on everything from solutions for mixed color temperatures to how to control natural light with a small team to where he’s fallen short and how he learned to better his skills.

And he goes into more advanced theory as well, like how to create richer subtext in your films, giving you practical applications while breaking down popular films and television, explaining the how and why of what they do well.

He’s sharing his lighting and cinematography skills in different cities all across the US as part of the Visual Storytelling 2 tour.

And tonnnnnns of demonstrations in which he invites you up to help him set up.

He’s on the road until mid September, but unless you live in New York City, he’ll only hit your city once.

I love Alex’s idea of drawing inspiration from all sorts of creative sources. What’s a non-film place that you look to for inspiration? Please share in the comments.