3 Everyday Tools for MoVI that Up your Storytelling Game

There’s a rumor going around the studio that I used to run a skateboard gang. That’s not true–at least, not completely true.

Ever since I was a kid I’ve been fascinated by movement. This fascination has impacted me as a filmmaker and how I use movement to tell story, when it’s warranted and puts story first.

This has led me to try different gear, before finding a piece that I love. I want to share that piece with you, the Freefly M5, and some knockout accessories I use to up my storytelling game, but first I want to touch on what first fueled that initial fascination.

They say you don’t remember much before age three, and while I don’t know the science behind how our memory works I do know that one of the earliest memories I can recall is learning how to ride a bike. I remember seeing all the older kids zip around the cul de sac and was eager to try it out for myself.

My first bike was a dark royal blue with yellow stripes. Matching yellow streamers dangled at the end of the stubby rubber handles.

And at the ripe old age of three, before I cared to learn about reading or swimming or coloring even, I learned how to ride a bike–with no training wheels. 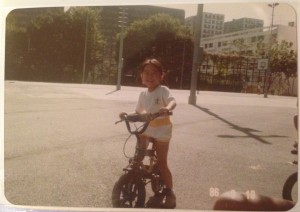 From then on I was hooked. Everyday I’d ask to go outside and ride with my friends. I was even getting into trouble because we’d pull old pallets and cardboard from a nearby dumpster to build a makeshift ramp to do jumps, mimicking what we saw on television. At most, I think I probably got 12 inches off the ground, but that’s a big thing when you’re little.

I didn’t realize it at the time but I loved the feeling of being able to MOVE.

So naturally, I wanted to be able to MOVE as a filmmaker. I wanted to use movement to help tell stories.

For the longest time I stood on the sidelines watching Patrick take his steadicam around the dance floor, chasing army cadets in the forest, and running out with NFL football teams–all things that required movement with a camera to move the story, literally and figuratively.

As a storyteller I want to put story first. I want to add energy and bring things to life through movement when the story calls for it.

But I was never able to take part in that because steadicam isn’t for me. I’m too small. The rig simply doesn’t fit right.

And glidecam requires more upper arm strength than I can easily handle for more than 10 seconds. Both of those also require considerable time in training and involve a rather steep learning curve to master well enough to use properly.

So I’ve tried a few different things, and knowing my size and what I can lift, I was definitely drawn to the Freefly M5. It literally gave me the freedom to move the camera in whatever way the story called for.

I’m not super techie but I’m fairly decent with gear so I guess I’m somewhat in the middle. Straight out of the box the M5 took me about an hour to setup and balance, and maybe another hour. It took maybe another hour or so to get comfortable with it.

It was intuitive, and as an engineer, I really appreciate design that is well thought out for the end user.

The most exciting thing though was the world of possibilities that MoVi opened up for me.

I am no longer limited in how I can move the camera, stuck to the ground with a monopod or too slow and confined with a slider.

I can now drop from the trees, skim the surface of a lake, pass off to another operator, walk with elephants, run in front of Aaron Rodgers and fly with it in a helicopter.

It means I can finally put story first and have a tool that allows me to tell the story through movement in a way that is not only fitting, but also challenges what I thought was possible.

Outside of the launch of the original Canon 5D Mark II back in 2009, the MoVi was the first thing since that time that’s been a total game-changer for me.

It gave me the same sense of freedom and invoked a feeling of curiosity that I haven’t felt since I tossed those training wheels on my little blue bike years ago.

And it is in that spirit of curiosity and trying new things that I want to share with you three knockout accessories that will up your storytelling game as far as movement’s concerned.

These will help you take your MoVi movement even further. And two out of three are really affordable.

These are tools, if you will, that we’ve added to our MoVi. We’ve been using them on all kinds of commercial, narrative, and documentary shoots across the world.

And the best thing about it is that these aren’t even your traditional film tools. No gear rental shop has them and yet you can probably find them anywhere.

Here are 3 everyday tools that will take your MoVi movement to another level.

Now to be honest this isn’t my thing (I’m more of a skateboard gal if you know what I mean) but Patrick uses them with the MoVi and it works really well.

A few years back when we were in San Francisco we met up with our friend Vinny Minton who has been shooting on glidecam with his pair of skates for years. He hooked P. up with his own set of blades. From then on I’d find P. packing rollerblades in with his clothes for shoots and I’m so happy does.

Last year we had a shoot in a corporate office outside of Santa Monica and were looking for a way to do a rather lengthy and complicated opening shot with the MoVi. It involved 15 or so extras, started at the elevator coming in through the lobby, and then continuing down the hall–all in one fluid motion.

It was a lot of coordinating and took about 8 takes but it was totally worth it. And I’ve never seen so many confused managers in an office before.

Movi + C100 + Wireless + the special ingredient // roller blades. This will be epic once it's filled with extras. 30 second fluid master to open the film. P.

2. Minivans, ATVs, golf carts, scooters – anything with power that moves!

While rollerblades require a bit of skill, and if you didn’t grow up on street hockey in Canada it might take you a couple of tries, knockout accessory No. 2 is way easier and all it requires is a bit of courage to hang out, literally. 🙂

Minivans are common production vehicles because of how much they can transport but they are also great for MoVi tracking shots. 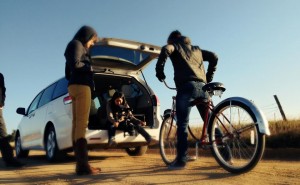 I’ve done it countless times and it’s really quite easy. Pop open the back door and you can get low enough to the ground for you to skim the surface if you’d like. Use a wide lens and it’ll really exaggerate the motion.

You can also start off to the side and then come up to the talent in one sweeping move. They also have a side door that lets you track from either side depending on the background and lighting conditions at the time.

Heck, we’ve even climbed on top of a 4×4 with rails in Namibia to get gorgeous moving scenic shots through the desert.

GIANT DISCLAIMER: This is not something Freefly endorses nor is necessarily safe and legal to do on open public roads.

We always tie ourselves down with seatbelts and have safety in mind and it’s gotten us some incredible shots. For us, vans have been extremely useful in getting moving tracking shots of people running, driving, riding motorcycles, and pretty much of anything that requires you to match their speed.

So many of us are solo shooters and we often forget that filmmaking is a team sport.

You can certainly do a lot on your own with the M5, especially if you have a pair of rollerblades, but you can do equally as much, if not more, with the help of a friend.

For example, start at a higher vertical level and pass it to a friend below. Take the rig through a window or move seamlessly from the back of a scooter down a driveway and into a home with just the help of a friend.

See that’s the beauty of it.

The M5 is so light and so intuitive that most people can learn how to operate simple movements in just minutes. But by having a second person there it opens up a lot of options for where the shot can go, how long it can be, and where it can take the story.

Those are the 3 tools that we use to take our MoVi to new heights and while those have worked well for us, and we encourage you to try them out yourself.

We’re also excited to check out the new line of tools Freefly just launched this week at NAB that totally brings things to another level.

They’ve taken what we filmmakers have asked for and came back with some pretty nifty new tools.

The MIMIC, an even more intuitive controller; the WEDGE, a 3-axis control system in a tiny package; the ALTA, the first truly out-of-the-box copter system for larger cameras; and the MoVi XL, the big brother to the MoVi M5 we’ve come to love.

This list is exciting to me not because they’re new toys but for how it’ll make our lives easier by simplifying the tech, and through that, all the new opportunities it’ll bring in how we can push our stories forward with very little setup and training.

More than anything I am curious to explore the movie magic this new set of tools will unlock for us in 2015.

Recently Freefly reached out to us about creating a film for the M5 that celebrates just that–unlocking the childlike wonder in each of us, and what it could mean for stories.

So we looked at how the M5 changes the entire filmmaking landscape, the experience, and what it means to fly, what it allows us to do, how it pushes what we thought was possible, and what it ultimately feels like to use one.

From there we came up with this concept of exploration, of following our hearts, and discovering what curiosity can lead to.

We then worked with our friend and renowned spoken word artist Marshall Jones to build out the script. We wanted the script to really capture that feeling of freedom and inspiration that comes from having such a versatile tool, but more importantly what that means for how we can now approach movement in story.

A huge thanks to Freefly for being so open to our idea and mad props to Story & Heart for connecting us to an amazing community of storytellers who loves their MoVi as much as we do. Without this group and their stories this piece wouldn’t be nearly as strong as we feel it is now.

Special thanks to all the filmmakers below for not only taking the time to share their footage with us but also sharing their journey, their challenges, their triumphs, and their stories that made this possible.

I’ve got my M5 with me this week and can’t wait to get out there with it!

For the adventurous ones out there how have you used your M5 and what tools have you used successfully to move like you’ve never moved before? Come on, we can’t be the only ones rolling around off ATVs and rollerblades.