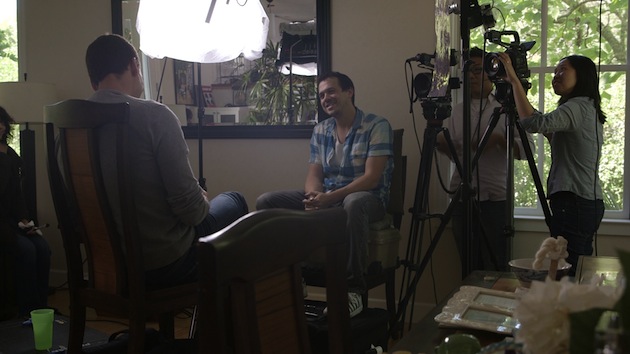 A lot can go wrong with an interview.

A crucial piece of gear was left at the studio…

There’s a construction crew outside…

The talent isn’t opening up about anything…

It’s always an intense shoot with lots of pressure on everyone involved, and if the interview does go wrong, it usually starts going wrong during the process of setting up.

These are Stillmotion’s 11 biggest tips for making sure an interview goes smoothly — and it all centers around the preparation. Giving yourself enough time, communicating with your team efficiently, studying up on your story… these things and more are what make for a relaxed and meaningful interview in the end.

We hope you’ll come back to this list before your next interview, and share any tips of your own here on the blog 🙂

Whenever possible, we try to arrive twice as early than we think we need to. Setting up always, always, ALWAYS takes longer than you expect it to take. There are going to be problems — a lot of them — and you’ll need to solve each one individually before you start rolling.

In fact — most of the tips on this list require you to be early… with a positive, take-charge attitude.

2. Set up the camera and lens first.

Your first instinct might be to break out your light setup and start piecing things together… but don’t! Set up your camera and pick out your lens first, so that you can see how things are coming together in the frame of the camera as you’re setting up your lights. This way, if something’s not working with your lights you know right away, and you can adjust in the moment.

It might seem like using all your best gear would mean you’re more prepared and “professional,” but we find that with an interview less gear is often more. Why use a fill light when a white foam core can bounce the light back in just as well?…

We’ve said it many times before and we’ll say it again: filmmaking is all about problem solving. Bringing less gear is also going to scare you a little — and therefore push you to be more resourceful when it comes to solving problems with what you’ve got in your immediate surroundings (hint: there’s always a way).

Which is a nice segue into our next tip…

4. Be aware of outside noises.

This is a big one!

Right when you show up to your location, take a look — and a listen — around you.

Is there construction outside? A buzzing fluorescent light? A band practicing next door? The sooner you start developing a plan to conquer these challenges, the sooner you’ll be rolling.

While we were shooting for #standwithme, we once had to pay some construction workers $100 to stop working for 30 minutes so we could do our interview… yikes.

That’s a more extreme measure we’ve had to take in order to quiet down the area for an interview before… usually if you ask nicely and confidently you can solve these issues without losing a Benjamin in the process. The point, however, is that you need to solve issues like outside noises before you start rolling.

5. Test your audio and expect problems.

If you forget to pay attention to step #4, you’ll definitely figure it out when you test your audio… one of many reasons you need to test your audio!

Reserve time during your setup to test the audio and make sure everything is working. Adjust your levels, make sure you’ve got a nice clear signal, and expect some bumps in the road.

The last thing you want is to bring in the talent, record the entire interview, and then come to find later that your audio levels were off and the whole thing sounds terrible. A thorough testing of the audio is the only way to prevent this!

This is one of the easiest things for a crew to forget. Generally the director has the best relationship with the talent, and it’s important that the interview feels as much like a conversation as possible.

For this reason, it’s important that communication with the talent once they’re on the set (i.e. “can you turn a little more to your left?”), is done by the director and not the DP or whoever.

Technology can be a very mysterious beast, and even though you might have all your camera settings squared away ahead of time, it’s a good idea to double check them before you press record. This is how you avoid tragedies like finishing the whole interview and realizing you were shooting in 30fps!

8. Communicate with the talent if you’re running late.

Things go wrong. They just do. For whatever reason, you’re probably running behind — and your talent is sitting outside the door waiting to do this interview already!

You might be wanting to just avoid going out there, because you keep telling yourself everything is SO CLOSE, and you don’t want to deliver the news that you’re still not quite ready to go. However, for us it works best overall to have the producer or director talk to the talent and explain that adjustments are still being made, and it should be just a few more minutes before we get started.

It’s important when you do this that the talent feels important — because they are. They’re the whole interview, and while it’s easy to forget how important they are when you’ve been tweaking the same two lights for 15 minutes. But perfect lighting isn’t going to do anything when it’s directed toward an unhappy interviewee.

9. Start the conversation outside.

You’re trying to get the talent to open up and help you tell a better story. You want them to feel comfortable talking to you, like they’re not doing an on-camera interview.

This can obviously be challenging, because of course they ARE doing an on-camera interview, but we find that for us it helps to begin the conversation with the talent outside, keep it going as we walk them to the set, and let the actual interview be a continuation of that conversation.

You don’t have to be an expert conversationalist to make this happen. Look at it as “warming them up” for what you’re about to ask int he interview. Walk them toward the set and start talking about the things you plan to ask in the interview… don’t worry about the talent saying something juicy off-camera. You can always revisit it later in the interview.

How can you avoid saying these cues when they’re such a necessary part of the production?

We use a series of signals among our crew members to communicate when we’re ready. The director walks in with the talent (with the conversation flowing!), and as she sits down, audio gives the signal that he’s ready to the DP, and when the DP is rolling she’ll give a nice firm shoulder squeeze to the director, and then he knows that everyone is good to go.

Of course, this is easier for us because we’re almost always the same team. Sometimes you’ll be working with people you just met, and this system of hand signals is not easy for new acquaintances.

The point is not to draw attention to the production. Your crew might not be at the point where they can silently communicate, but we encourage you to push yourself to get there — because it’s done so much for our interviews and we believe in this method.

Eye contact, nodding, a thumbs-up… whatever you can do to communicate without yelling “rolling!” is a step in the direction of a smoother interview.

Last but not least, everything is going to go smoother if you know your story.

Interviewing someone can be nerve racking. You don’t want to sound stupid, and you want this interview to be special so that your film stands out. This is a lot of pressure, and it’s only going to make you more anxious if you don’t know your story well.

To make the whole process easier and the interview far better in the end, you’ve got to know your story. Do all the research you can, and don’t be afraid to call the talent ahead of time if you need to ask them something that you know is going to make the interview better overall.

The talent understands that you’re trying to make a good film, and they’re usually excited to be a part of the project.

It’s like digging a hole: dig down as far as you can before the interview, and from there you can only go deeper.

What did we leave out?

These are our own strategies for making our interviews run smoothly… but we know there are all kinds of strategies out there that might work for other crews.

What steps do you take for a smooth and successful interview? Share them with our readers!